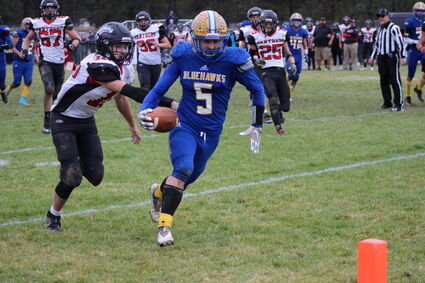 HAWK SENIOR NATHAN SCHRAEDER runs in for a touchdown against Park City on Saturday. Schraeder scored two touchdowns for the Hawks within one minute.

The Thompson Falls Blue Hawks moved one step closer to a state championship last weekend as they defeated Park City 41-16 in the eight-player semifinal game Saturday on their home turf at Previs Field.

The Hawks started out the game as they have most of the rest of the season, scoring early an...