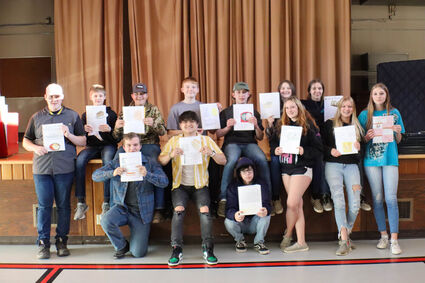 The relationship between food and art has allowed the students of Noxon to explore their creative side as well as their cooking skills. Noxon's middle school art class and Intro to Art students attended a launch party last week in the school's multipurpose room to celebrate their newly published cookbook.

"Each student was responsible for writing and illustrating a recipe," said Noxon School art teacher Jessie Novak. The cookbook contains nearly 30 recipes and took the students only a week and a half to create. "Red Devil Bites" was printed, bound and laminated at Noxon School.

Novak says the inspiration for the project was spurred from a lesson she taught her students called "Meaningful Foods." "From there, we decided to turn the project into a book," Novak said. "I'm really impressed with how the cookbook turned out. The students really connected with the project and now they have something they can keep for the future."

The school printed enough cookbooks for each student to take home, and because the experience was such a success, Novak says she will turn the lesson into a yearly project with the possibility for future fund-raising opportunities.

At the launch party, each student brought in a dish from the recipe they submitted. "Today, we're tasting the recipes and celebrating what we accomplished," Novak said at the party. 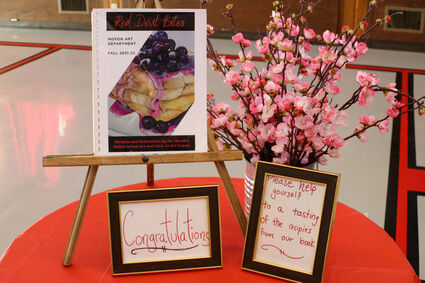 Shane Murray wrote and illustrated a recipe for his twice baked cauliflower as it is one of his favorite dishes to make. "It was the first thing that came to mind," he said. "It's really good and I make it at home pretty often."

Treven Monegan's philly cheesesteak recipe made it into the cookbook because it's a dish he's quite familiar with. "I used to make it when I worked at Garcia's Cantina and Café in Alaska," Monegan said.

The cookbook contains a combination of breakfast, lunch, dinner, dessert and appetizers. The dessert portion, Novak says, was the most popular category with the most submissions.