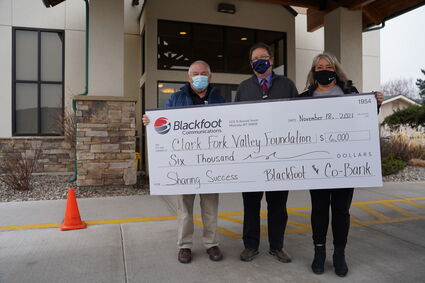 Blackfoot Communications presented $6,000 last week to Clark Fork Valley Hospital (CFVH) on behalf of the telecommunications company and CoBank. Tom Eggensperger, president of the Blackfoot Board of Directors, and Account Executive Kris Sweeney presented the funds to Barry Fowler of the CFVH Foundation last Thursday.

“The hospital has been so important to communities through COVID,” Eggensperger stated. “We appreciate what Clark Fork Valley Hospital does as a customer.” Fowler said the foundation raises funds to give back to the hospital each year. The goal is to raise $20,000 a year, and the donation from Blackfoot and CoBank helped them reach their objective. The foundation was unable to hold two of its major fundraisers this year, the Clark Fork Adventure Challenge and the annual fall gala, but Tonya Revier with CFVH said the foundation still had a successful golf tournament this summer which brought in about $10,000. Fowler said this year the foundation was able to help the hospital purchase a four-wheel-drive vehicle for the Home Health and Hospice division.

“This is one of the greatest things about Blackfoot, supporting local communities,” Sweeney stated. The donation included $3,000 from CoBank and $3,000 from Blackfoot. CoBank is a national lender that delivers loans, leases and other financial services to rural customers.