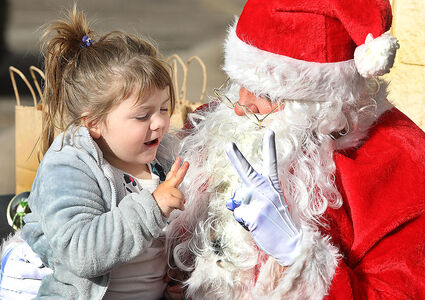 NOT MUCH OF A LIST – Five-year-old Addaleigh Motes of Hot Springs tells Santa Claus that she only wants candy and a baby doll.

For an hour and a half, Santa Spurr listened to children tell him they were good - he always got a quick confirmation from parents - and letting him know what they want for Christmas. "I love doing this," said Spurr, who has been playing Kris Kringle in Plains for nine years and will be back again on Saturday, December 18, for the "Christmas Extravaganza," an event that will include a parade and other activities, said Erika Lawyer, who helped sponsor the Santa visit and will be helping to coordinate the upcoming event.

"One of your elves said to say hi," said 7-year-old Pearl Ferlan of Plains. Ferlan was one of almost 30 kids to visit with Santa, in addition to one man who stopped to tell him that his wife was a bad girl. Emmalynn Tickler, 4, of Plains said she wanted a Barbie Dream House and she promised to put cookies on a plate for him when he came on Christmas Eve. Addaleigh Motes of Hot Springs wanted only candy and a baby doll. There were a few who refused to sit on Santa's lap, but being Santa it is always a plus when a kid doesn't throw up on him, he said, although he said it has happened to him before. Spurr has been playing the jolly old elf for more than 20 years. "I've been doing the Santa gig since I was 16," said Spurr, who still has a Santa suit from the 1960s, but he said it's well worn and "looks like one of those cheap cliché suits we saw when we were kids." His daughters, Cooper, 10, and Kendall, 8, still believe in Santa. Spurr told them he dresses up as Santa because the real Santa always asks law enforcement people for help this time of year.

The kids Saturday ranged from 5-month-old Briggs Bache of Plains to teens that only sat with Santa to appease their parents, who wanted a photo. There were a handful of kids whose parents were passing through town and spotted Santa on the side of the road.

The Santa Spurr will be visiting with kids again on December 18, though a time has yet to be established.