REVERENT CREMATION – Noel Furniss tosses a batch of small folded American flags into the barrel of flames for a proper retirement. Furniss was one of 14 veterans to participate in the VFW's annual flag retirement in Plains last week.

The flags might have been worn out, but the patriotism of the men and women who handled the unserviceable ensigns last week was not.

Fourteen veterans from all five branches of the military gathered in the rear parking lot of VFW Post 3596 in Plains last Tuesday to take part in the annual flag retirement. The veterans took on a somber and reserved stance as they placed Old Glory in barrels of the flames that slowly transformed the splendid red, white and blue into gray and black ashes.

"We honor these United States each time we retire a flag," said Ron Kilbury, commander of VFW Post 3596 in Plains, which conducts its flag retirement commemoration each year on Dec. 7 in remembrance of the 2,403 military members and civilians who perished when the Japanese Empire attacked Pearl Harbor in 1941, which compelled the United States to enter World War II.

Kilbury once again served as emcee for this year's ceremony, which started with Gary Jensen, who served in the Navy from 1970-1972, placing a worn out Navy service flag into the fire in honor of the 80th anniversary of the Japanese attack. "Tonight we honor the symbol of our American freedom, the American flag, as we retire her from duty," said Kilbury, a 26-year veteran of the Army and Navy. "The American flag, otherwise known as Old Glory, the Stars and Stripes, or the Star-Spangled Banner, represents the land, the people, the government, and the ideals of the citizens of the United States of America," Kilbury told the vets and the handful of community members at the ceremony. He explained that when a flag becomes "worn, torn, faded, or badly soiled," it should be replaced with a new one and the old one should be retired. Although there is no mandatory way to dispose of a flag, the preference is burning, said Kilbury.

Air Force veteran Heather Allen, the post quartermaster and adjutant, helped coordinate the ceremony and properly fold the flags as people dropped them off at the VFW over the last year. "I feel respect and honor when retiring the flags because it is the symbol of the country I love," said Allen, who believes it's extremely disrespectful when people burn the flag in protest. "We try our hardest to honor the flags properly," added Allen, who folded a couple last minute drop offs just prior to the ceremony with Kilbury. The flags are stored throughout the year in a custom made pine crate made by Army veteran Charles Vogliardo, who recently moved to Plains from Texas.

The retirement ceremony included 174 American flags from 3X5-inch flags to the 37-foot long Sanders County Fairgrounds ensign. It took about an hour for Allen, Eric Allen, her husband, an Army veteran, Noah Hathorne, a Marine Corps veteran, and Hunter Fielders, an Army vet, to dissect the fairgrounds flag a week earlier, separating the red and white stripes and the blue star field, which were placed into the fire at the ceremony piece by piece. Allen said that about one-third of the flags were merely faded. Most looked good, except for tattered ends, but a few of them had half of the flag missing. The smallest ones ended up in the traditional triangle of just over two inches long. The only other flag to be retired was the Navy flag.

"The ceremony itself is a funeral for the flag. The flag of our nation is a living entity holding the spirit of the people of these United States. Treating it as a living thing and respectfully retiring it, honors that spirit, people and the nation," said Kilbury. The 12 men and two women veterans lined up one by one to put flags into one of two barrels of fire. Within minutes, the fires were so hot the veterans had to toss the flags into the barrels. The club's newest member, Samantha Bebb, who retired as a lieutenant colonel in the Army on Nov. 30, participated in the ceremony, as did the only American Legion member, Wayne King of Plains, an Air Force veteran, and Joseph Wittig of Camas Prairie, who retired from the Army after 22 years.

"I thought it was an ending to a generation and the beginning of a new," said 30-year-old Plains resident Hunter Fielders, who served in the Army's Airborne Infantry. "And the fact that today was the anniversary of the Pearl Harbor attack, that really hits home," added Fielders, the youngest veteran to take part in the retirement ceremony, his first since joining the Plains VFW. Fielders' grandfather, Harry L. Scott Jr., was a crewman aboard the battleship USS Oklahoma when the Japanese attacked in 1941.

Fielders' father and mother, Shawn and Charee Fielders, were also at the ceremony to pay their regards to the retiring ensigns. Charee wore a sweatshirt with photos of her father, Scott.  Scott was one of the men who helped cut a hole in the capsized Oklahoma to free trapped crewmembers, she said. The 583-foot Oklahoma was righted and salvaged two years later, but was too damaged to return to duty.

"We all served under that flag for this country. For me, this ceremony is a sign of respect and pride," said Fielders, who wore a folded American flag under his armor during his nine months of combat during "Operation Enduring Freedom" in Afghanistan.

The ceremony was also a first for Thompson Falls resident Noel Furniss, 65, who served in the Air Force, Marine Corps and Coast Guard for a total of 35 years, retiring as a chief master sergeant in the Air Force in 2009. Although the Coast Guard didn't lose any vessels or men in the Pearl Harbor attack, the Coast Guard Cutter Taney, a 327-foot high endurance cutter, fired at passing Japanese planes as they passed overhead from its moorings in downtown Honolulu. 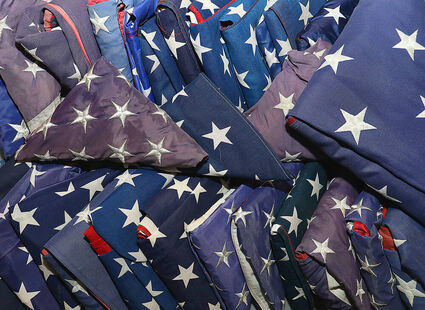 "I thought it went well and this is a good way to pay respect to the flag," said 82-year-old Jim Gillibrand, who served in the Army from 1958 to 1961 and was the oldest veteran at the ceremony. Gillibrand said the service never gets old for him. He used to especially like it when the kids from the former Boy Scout troop in Plains conducted the ceremony. It was actually then Scoutmaster Joe Sheppard and Troop 46 who started the flag ceremony in 2001. "It was nice when the Scouts did it because it taught them respect of the flag," said Greg Davis, a retired soldier. "It's a tradition that's hopefully carried forward with our younger members," said Gillibrand. Veterans Otto Otnes and Tracy Muse were also on hand at the ceremony.

The VFW also hosted a spaghetti dinner on Tuesday. The dinner was $7 for adults and $5 for children, but free for veterans. Twenty-one veterans and 14 community members attended.