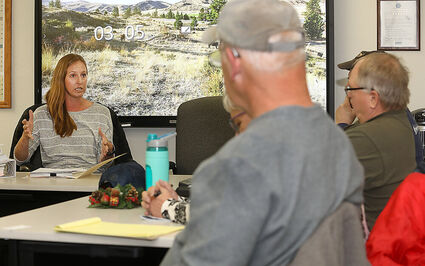 CATCHING UP – Collette Anderson of Great West Engineering briefs the Paradise Sewer Board members on the proposed sewer project at a meeting at the Sanders County commissioners conference room in Thompson Falls. The board members present were from the left: Don Stamm, Janice Barber, Terry Caldwell and Dewey Arnold.

There weren't many agenda items on the monthly Sanders County Sewer District at Paradise meeting last week. The four board members present met at the Paradise water pump house and authorized the purchase of just over $400 for computer equipment and discussed the structure of the future meeting agendas.

The meeting lasted a little over an hour, but the board's work continued the following day at the courthouse in Thompson Falls, where board members Terry Caldwell, Don Stamm, Dewey Arnold and Janice Barber met with the county commissioners and Collette Anderson of Great West Engineering of Helena. Janie McFadgen, the sewer board's secretary, could not make the meeting. Anderson requested the get together in an effort to bring the newest members up to speed on Great West's work on the project. Initially, it was going to be only recently appointed members Stamm, Arnold and McFadgen, but Caldwell, as chairman of the board, wants the entire board involved in any meetings, emails or other correspondence concerning the project. "We're no longer doing things the way it used to be done. We're a board and we function as a board, not individually," said Caldwell, who was voted as chairman at the November meeting. He mentioned the day before about correspondence still going to Sunny Chase, the board member recalled in an election earlier in the year.

Anderson, Great West's project manager, gave the board a quick overview of the project since it began in 2005. She said Paradise was "top ranked" with the Montana Treasure State Endowment Program, which gave Paradise the maximum number of points and $750,000 toward solving a public health and safety need. Paradise resident Jina McHargue brought up at the sewer board meeting Tuesday that the $102,000 the board had listed as a "local contribution" was intended for the water board and not for the sewer project, but at the courthouse meeting, Anderson said that money came from Paradise resident Bridger Bischoff for the sewer project.

Great West Engineering was selected five years ago as the project's engineering firm and had come up with a design for the treatment plant and drainfield, but it was put on hold after BNSF Railroad refused to give the county an easement for the drainfield. Caldwell said Great West should have locked down the railroad's permission prior to spending money for a design that required the easement, but Anderson said that's untrue. "We would not have been able to define the mixing zone prior to design of the system. Additionally, the district was granted a groundwater discharge permit with a mixing zone allowing the discharge of treated effluent to the drainfield as we've designed," said Anderson, who added that the Montana Department of Environmental Quality (DEQ) engineering department determined that the purchase of Bischoff's land requires a subdivision review, even though he doesn't have a subdivision in place at this time. She said Great West's interpretation was that the Subdivision and Platting Act and Subdivisions Act does not require a review, but that DEQ was unwilling to grant the project approval without that review. In addition, she said that the Administrative Rules of Montana indicate a mixing zone easement is not required on right of way for railroads, but that DEQ determined that the railroad property adjacent to the proposed drainfield is not considered a right of way.

"While DEQ permitting section has granted the district a discharge permit, the DEQ engineering group has not granted full approval of the project. Until we get DEQ approval from the engineering reviewer at DEQ, we can't move forward," said Anderson. "DEQ has indicated they will not give us approval without the easement. I believe further discussions among us, the district, and DEQ on this matter would be useful," she said. Anderson added that even without the easement, it doesn't necessarily mean the engineering firm will have to redesign the project. "We will be discussing options to move forward with the board and it will be the board's decision how to proceed." She also feels that it would be beneficial to have a meeting that includes the sewer board, county officials, Great West Engineering and DEQ.

Caldwell has said the board is looking at the possibility of relocating the area for the drainfield closer to town on property also owned by Bischoff, which wouldn't require an railroad easement. He said the board is also looking into a system for only Paradise proper, which Caldwell believes would reduce the overall cost. Anderson said it's difficult to determine how much money would be saved by reducing the geographical area, and that if it is confined to that area, Bischoff's $102,000 contribution would not be available. The Sanders County Sewer District at Paradise has collected more than $6 million from seven grants and contributions and has a balance of around $5.5 million. The grants were obtained by Great West Engineering, said Commissioner Carol Brooker.

"Currently the system is designed to accommodate growth and given that the natural area of growth is on Bridger Bischoff's land adjacent to Paradise proper, part of the land negotiation included plans to allow his property to connect to the system if he were to have an approved subdivision," said Anderson. "There are approximately 100 planned sewer service connections within the district, including vacant lots that could each be assessed the $185 to service the debt needed to construct the project. Bridger's proposed development includes an additional 40 equivalent units. If those 40 units are removed, the assessment for the debt would be dispersed among the other users," she said, adding that all of the collection system piping, manholes and lift station would still be needed.

By reducing the area to Paradise proper, the system would no longer be extended to the Paradise Church of God, the post office or the Paradise Center, which prompted the Paradise Center Board of Directors to send a letter requesting to provide their input on being included in the new proposed system. "Exclusion may restrict the usefulness of the facility long-term, which may be of special concern to the county, the owner of the building," wrote John Thorson, Paradise Center's board treasurer. "While we have a relatively new septic system, it is nevertheless one-third through its estimated service life. Also, in rate setting, utilities usually try to include larger users who pay more. This is especially beneficial when, as now, the cost of capital is low," wrote Thorson, who is slated to be on the agenda for the next sewer board meeting, scheduled for Tuesday, January 10, at the water pump house. The sewer board had hoped to hold its monthly meetings at the Paradise Center, but would have to pay $40 each time.

Reducing the area for the new system could also affect grant funding, according to Brooker. She believes the board needs to go over some of their ideas with the funding agencies before they make any big changes. Brooker said she thinks the funding agencies are concerned, but have yet to say anything about pulling out funds. "The project just needs to move forward," she said. "Changing the scope of the project from what was approved in the various funding applications may or may not be approved by the funding agencies," said Anderson.

"Great West has worked hard on behalf of the district and as a result have secured over $5-million in grant funds for their project. We have designed a wastewater collection and treatment system that will serve the community well for the long term," said Anderson, who felt the meeting went well and would attend the January sewer board meeting, if requested.