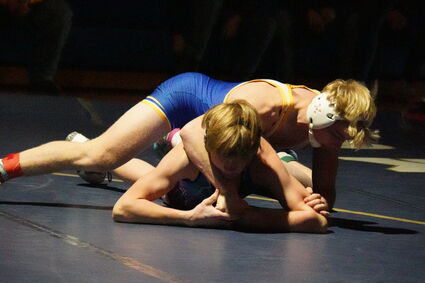 Thompson Falls senior Trae Thilmony got a little Christmas bonus last week when he was named to the East-West Shrine Game roster. Thilmony is among the best in the west in football and will play in the Montana East-West Shrine Game in June 2022. The all-star game will be held in Great Falls and the Blue Hawk was selected as a linebacker for the west team. The annual event helps raise money for Shriner's Hospital in Spokane. Senior Kyle Lawson of Hot Springs also made the East-West roster as a specialist.

"It should be a busy June," Thilmony said, noting that he'll have the 8-man all-star football game and the East-West Shrine game during the month. "That's what I was hoping to finish the season with. I didn't want to be done playing football."

Thilmony will also have a busy spring after his senior Blue Hawk wrestling season concludes with him aiming for a third straight state championship. Following the All-Class state meet at the Metra in Billings in February, Thilmony will again be traveling across the country, includuing to Virginia and Iowa, for wrestling tournaments. "I would like to do well in the off-season tournaments," the Blue Hawk said. "It's great competition. Everyone you wrestle at those tournaments is good. It's a good chance to show college coaches what I can do." Thilmony has not made a decision on where he will go to college next fall, but he is certain he wants to wrestle beyond high school. The two-time state champion also said he enjoyes being around the younger wrestlers in Thompson Falls and helping them. He sees a lot of the younger Hawks aiming to being able to travel to some of the bigger tournaments.

In another milestone, Thilmony was recognized during the Blue Hawk wrestling home mixer on December 21 for joining the century club. Announcer Tom Holleran, who coached the Blue Hawks for many years, recognized Thilmony for achieving 100 wins in his high school career. He reached the milestone during the divisional semifinal match last season. With the win Tuesday, Thilmony now sits at 119 wins in his high school career. Thilmony was happy to become a member of the century club. "Not a lot of juniors get to that point," he said. "Usually it happens mid-season of your senior year."