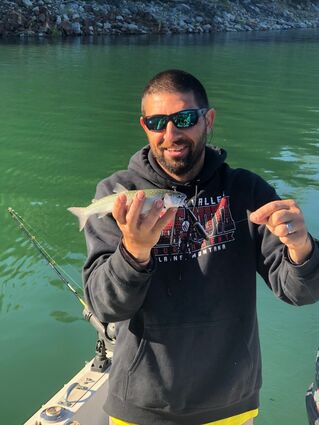 It is with both love and deep sorrow to remember James Edward Cork II, a devoted and loving husband, father, grandfather, son-in-law, son, and friend to many, who passed away unexpectedly on December 31, 2021, while working in North Dakota.

James was born in Plains, Montana, in March of 1977 and raised in Thompson Falls, where he attended Thompson Falls Public Schools from kindergarten through high school. He excelled in football, basketball and track and graduated in the class of 1996.

James met the love of his life, Courtney Harris in his hometown and they officially started the rest of their lives together with a beautiful wedding in April of 2004. His loving wife of nearly 18 years recalled that James always looked into her eyes unlike anyone else, with total infatuation. The happy couple lived and raised their children in Thompson Falls. Together they brought up her adoring boys Braxton and Trevor and grew their family with two beautiful daughters, Brooklyn and Bella.

This family he created was his greatest accomplishment and James loved them all fiercely. He had a role model work ethic that he demonstrated by working hard yet having plenty of time for his family. He took pride in raising his children as Blue Hawks at his alma mater. He was highly involved in his children's lives, encouraging them and cheering at every sports game. He dedicated time as their coach in soccer and baseball. James was exceedingly proud of the men his boys grew to be and enjoyed raising his young daughters to reach the same success. He looked forward to watching his daughters and grandchildren in more sports as they grew up.

James was also an avid outdoorsman. His smile was brightest when he was enjoying the great outdoors. Fishing was his happy place, whether he caught a small trout in Montana or the biggest marlin in Mexico. He was equally skilled as a hunter by rifle and bow. He enjoyed taking each of his kids hunting and teaching them everything he knew. His boys are convinced they will forever be chasing his personal records. James also loved camping with his family, snowmobiling, jet skiing and countless other outdoor activities. James was known to have many skills and talents. He could fix anything from everyday household repairs to building demolition derby cars. He was very creative with multiple mediums, including spray painting model cars, tying fish flies and baking/decorating elaborate cakes for his children's and grandchildren's birthdays. His life was full of entertaining stories, a few close calls and much laughter. James will forever be greatly missed by his family and the Thompson Falls community.

The Cork, Jacobson, Eubanks and Harris families would like to extend gratitude to everyone who has shown their support surrounding the sudden loss of this irreplaceable man.

A memorial service will be held at a later date.