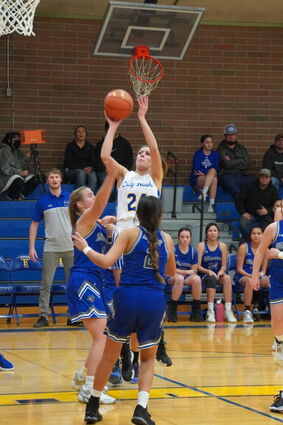 Sanders County basketball teams are back in the swing of competition after the holiday break and some unexpected weather delays. Games for Thompson Falls and Plains were postponed last week after a winter storm swept through Sanders County.

The Thompson Falls girls hosted Mission on January fourth, keeping their win streak alive with a 55-43 victory on their home court. Both teams utilized the press early in the game, but the Hawks bested the Lady Bulldogs throughout the game, outscoring Mission in three of the four quarters. "We are improving every game every week," said Lady Hawk Coach Chadd Laws. "Mission is a very competitive team and we had to make some adjustments. They are tough."

The Blue Hawk boys were scheduled to host Mission on Thursday, but that game was postponed until February 1. Both teams were set to travel to Eureka last Friday, but that was also postponed due to weather. The Blue Hawk boys traveled to Eureka this week, losing a close game 56-48 to the Lions on Monday. "It was probably the best four quarters we've played this year," Coach Jake Mickelson said of the Monday matchup. "It shows a lot of growth. They showed up and competed hard." He added that junior Breck Ferris had one of the best games of his Blue Hawk career. "He's such a good athlete," Mickelson said. "He was an animal on the boards." The coach also said that overall the team is improving, starting to learn where they will excel on the courts. Mickelson noted that senior Nathan Schraeder has been a great leader for the team.

The Lady Hawks played host to Bigfork on Tuesday, with the boys set to play in Thompson Falls on Thursday. The Hawks will then face off against Deer Lodge at home on Saturday.

The Plains basketball teams had a busy schedule last week, hosting Charlo on Friday and traveling to Eureka on Saturday. The Horsemen came up short in both games, in both points and players. Coach Tyrel Allen stated he had just six players over the weekend as several players, including two starters, were out as the team works around COVID-19 contact restrictions. Allen also is off the court this week as a close contact and so the team is making adjustments.

The team used the games last week to practice on specific parts of the game. Against Charlo they played a zone defense all four quarters and worked on blocking out. "I told them to just continue getting better. It will just make them better players individually," Allen said. "All they can do is the best they can." The Horsemen have had C team players coming up to junior varsity and JV players stepping up on varsity. His players were exhausted last weekend, but they kept playing hard and the coaches are seeing improvement in their players. "We've seen some great improvements. Their footwork is getting better," Allen said. In Eureka, he said the team did a good job of breaking the press against the Lions. "Their confidence is going up and they haven't given up." COVID-19 continued to have an effect on the team this week, as the boys' varsity game against Hot Springs scheduled for Tuesday was postponed.

The Trotters also played against Charlo and Eureka last week, falling in both contests. Against Charlo, Krystena Boes and Carlie Wagoner led the Trotters in points with eight each. The team came up short in the 37-17 loss. Against the Lady Lions, Boes again led the team, scoring 13 points and taking two charges. Jaelyn Carr sank two three-point shots in a row at the end of the game as the Trotters kept fighting. Wagoner scored three points and Kaylah Standeford had three points and four assists.

The Noxon Red Devils had one contest last week, traveling to Charlo on Saturday. The Red Devil girls came up short against the Vikings, losing 49-15, and the boys lost 52-29.