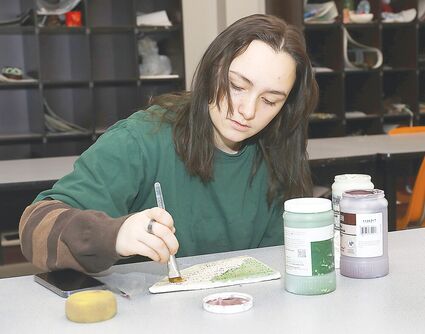 GETTING READY – Plains High School senior Hailee Steinebach works on her contribution to "Perseverance," artwork for the Art on the Walls project at Clark Fork Valley Hospital. Eight students contributed to the piece.

Students from Kristen Cole's art students from 7th grade to seniors have been working on their projects for months and some were putting in their finishing touches up to the day of turning them in this week to the Paradise Center's arts committee, headed by Joy Nelson, who said they'll be displaying the art the following week. Each county school was invited to display art, but Nelson said she didn't know how many planned to participate. The exhibit shows work from kindergarten students to seniors.

Cole will have around 50 pieces of art from her students, which is low due to Covid complications, but she said there will be some quality work on display. "I see a lot of potential in these classes," said Cole, who has taught art at Plains for 28 years. She added that there is a lot of growing talent in her classes.

This is the first time her students have collaborated on a project for the Art on the Walls program. Eight of her 3-D art students - Aiden Castonguay, Adelle Eranbrack, Stacie Foley, Alexander Horodyski, Django Oakcedar, RuBea Privett, Gabriel Worrall, and Hailee Steinebach - have worked together over the last few weeks to create "Perseverance." "Our first idea was to name it 'Hope,' but I thought that was lame, so I thought 'Perseverance' was better," said Oakcedar, a 15-year-old freshman.

The artwork is a collection of 10 ceramic pieces ranging from about five inches to nine inches, which are attached to a round piece of 21-inch wide plywood. Eight-inch hands, made by 15-year-old Privett, a freshman, held the world at the top. The other pieces were comprised of poetry and quotes, such as Horodyski's input, "Forget the pain, mock the pain, reduce it and laugh," by actor Jim Carrey. Each piece was glazed in different colors. Steinebach, a 17-year-old senior, used part of a poem entitled "The Old Poets of China," by Mary Oliver. Steinebach went with green glaze for land, blue for water and brown for the text. Steinebach has participated in the hospital exhibit several times and won People's Choice honors with a drawing of then President Donald Trump. She also has three acrylic paintings in this year's show.

Privett elected to go without glaze on the hands because she thought the glaze, even a clear glaze, would hide the detailed wrinkles and veins she included. She also wanted to leave them white to make them sickly looking, which went with the perseverance theme, said Cole.

The students worked on the piece for about six days and were delayed when one piece shattered in the kiln. "They helped each other a lot. They're artistic and compassionate and they have the ability to discuss the art process with each other," said Cole.

Horodyski, sophomore, had seen a lenticular photograph at the Sanders County Fair last year and wanted to try it. He experimented with two others, but wasn't happy with the results. His third one, two shots of a spread deck of cards entitled "You See One, Then You Don't," merged into one was a success. Using the class Nikon camera, he did it by shooting the two images, printing them, cutting them into about 20 strips, then gluing each one-inch strip back together, but with an accordion look. He said the process takes a lot of precision to give it the 3-D effect. He also has a colored pencil drawing of the Batman Joker in the exhibit.

This is Horodyski's second time to participate in the hospital exhibit. He did a sketch of Jesus in the seventh grade. However, he'd like to continue with making lenticular pictures and even delve into doing hologram images, which takes a special software program. He plans to make a hologram of the heart on Baldy Mountain.

Cole's students will also be exhibiting artwork in graphite, charcoal, colored pencil, marker, acrylic, ink, watercolor, and clay. The students aren't required to participate in the Art on the Walls program, but Cole encourages them to enter because it builds confidence and encourages their art process. Plains School has participated in the program since it began over 20 years ago. The school also puts on an art exhibit at the school each May. "I am very proud of all the students' accomplishments and look forward to seeing their work displayed on the hospital walls for all to enjoy," said Cole.