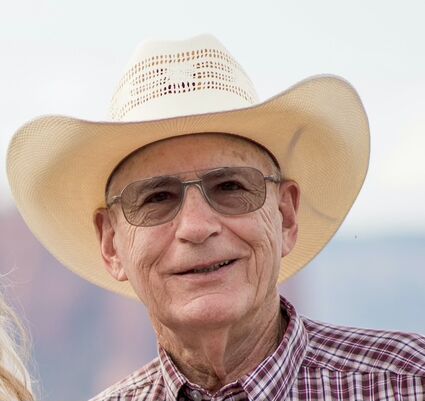 Larry D. Wade, our real cowboy, rode into the sunset to be with his Savior, Jesus, on Tuesday, December 28, 2021, at Brookdale in Las Vegas. Larry was born November 17, 1941, in Cozad, Nebraska, to the late Don and Della Wade. His family and friends will remember him as enjoying the outdoors. He enjoyed attending and watching the PBR and NFR. Before entering his teaching career, Larry rodeoed for 10 years. In 1965 he won a Regional Championship in saddle bronc riding.

Larry taught math and science to middle school students for 25 years. After retiring from teaching, he invented and manufactured a product which was for carrying rifles, bows, fishing poles and the like and named the company Montana Scabbards. Larry loved playing his guitar and singing. He was in a band as a lead singer and recorded a CD. He played at weddings, birthday and anniversary parties and even a few funerals. Larry enjoyed working with his hands, making bird houses, bird feeders, clocks and other crafty items.

The family would like to express their appreciation to the nursing staff at Brookdale-Vegas for their diligent and caring support of Larry while he was in their facility. He was loved and enjoyed by all. He will be greatly missed by his many friends and family, especially his wife, Sandy.

In lieu of flowers, the family has requested that any and all contributions or donations go to Cabinet Mountain Bible Church, P.O. Box 1475, Trout Creek, MT 59874.

A memorial service will be held in Mesa, Arizona, officiated by Rich Thorson.