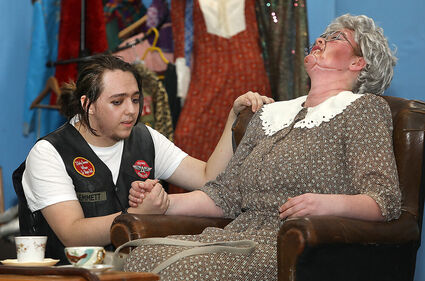 DEATH SCENE – Michael Cain, played by Dawson Brown, holds the hand of Lily Adair, played by Aubrey Tulloch, in one of the more dramatic parts of "A Little Piece of Heaven," a play put on by Plains High School's drama club.

The Plains Drama Club's first performance in the new school building was a big success last week, according to the club's coach Terri Henry. "It was great! Both performances were superb," said Henry, the drama coach for 30 years. "Every character was well played and held while on stage," said Hen...