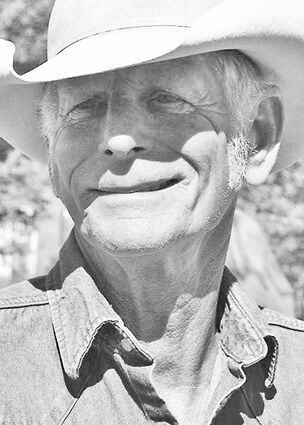 Kacey F. Collins passed away at the age of 71 on January 26, 2022, surrounded by his family in Helena, Montana. Kacey was born on September 5, 1950, in John Day, Oregon, to Merle Lee Collins and Juanita Hayes Collins, and was delivered by his grandmother Laura Collins Legler who was a nurse at John Day Hospital. When Kacey was born, his mother named him after the saddle bronc rider Casey Tibbs, and true to her sense of humor and fun, his middle initial "F" stands for "the first twin out the chute."

Kacey grew up on a cattle ranch on Whitepine Creek in Thompson Falls, Montana, which made the perfect setting for he and his twin brother Kelly to practice their roping skills on some local deer which were later spotted trending the family brand when they passed through the game checkpoint. Their mischievous experiments ranged from "sleeping" chickens to roping bears, and he and some buddies became local legends when they put a friend's VW Bug in the library of the high school in Thompson Falls. When the owner of the Bug finally found his car, he simply started it up and drove it down the stairs to the street!

Kacey came from a long line of rugged Oregon pioneer rodeo and cowboy ancestors making him a man of many trades; from logger and over-the-road driver, to managing gravel pits in Colorado and Oregon, working at a gold mine in Nevada, equipment operator, and even working as a bartender at the Thompson River Ranch in Snyder near Thompson Falls. In his early 20's Kacey served in the National Guard based out of Kalispell, Montana for seven years and was stationed on both the East and West coasts during his time with the Guard.

It was while tending bar at Thompson River Ranch that he met Marsha Henderson. Later on, the two served as Watkins' first sleeper team & made many memorable hauls together, spending many years on the road, based out of Montana and Los Angeles. As a solo driver before he met Marsha, Kacey made many unusual hauls across the country, and in the 1970's hauled Tommy the Turtle to Bottineau, North Dakota.

In the early 1990's he and Marsha settled down in Helena, Montana, where they purchased and operated A-1 Towing & Recovery, which they had for 24 years as a team together. Kacey is legendary for his recovery work as well, and there wasn't any logistics or mechanical challenge he couldn't solve. When the bridge over Prickley Pear Creek to their family home needed to be replaced, he used two wrecker trucks to install the new train car bed in place of the old bridge, lifting and moving the flatbed iron into place with winches and cables.

In 1994 they welcomed their daughter Sierra Collins, who joined her big sister Kacey Lee, Kacey's daughter from a previous marriage. While Sierra was in high school, Kacey took on another occupation as a rodeo girl's chauffeur. Once she started hauling on her own, he was promoted to fleet manager and made several successful rescue missions to keep her going down the road.

Kacey's obsession with flying started with powered parachutes and continued with him to his earning his pilot's license. In 2010 he developed a passion for cooking and loved to watch cooking shows for new meal ideas that he could try out. In 2017, he and Marsha took up cowboy action shooting as well as dancing. Kacey preferred country music but if there was a good beat, his (extremely ticklish!) toes would be a-tapping! Dancing was always in his Wrangler jeans and he loved many types of music, from Glenn Miller's "In the Mood" to Merle Haggard's "Silver Wings."

In 2019 Kacey and Marsha sold A-1 Towing and enjoyed their new-found retirement. When it came to equipment, there wasn't anything on rubber or tracks he couldn't drive, fix, or get a full day's work out of. To say he will be missed is an understatement beyond words. His rodeo stew will never taste the same, there will be that extra space on the dance floor, and now an empty seat in the rodeo truck.

We would like to thank all the friends and neighbors who have helped out during this difficult time, with a very big thank you to Ginger, Tracy, Kari and Koty for being there with him and us that last week, and to the McLaren's/McLane's for opening their arms and hearts to the Collins' since day one. Thank you to St. Pete's Hospice and all of the staff at Legacy Assisted Living who have shown such amazing great care and compassion for Kacey, and last but certainly not least, a very special thank you to the towing community who have been along for the ride of Kacey's lifetime.

Kacey's services and a tow truck parade were held in Helena on February 2. Due to short notice and not everyone who loved Kacey being able to attend that event, the Ward family will host a celebration of life for him at their place on Blue Slide in April, and will let the community know when a date has been set. Thank you all for caring for our brother/uncle over the years - he's a force who can never be replaced!

Fly high Kacey Collins, you will forever be loved and missed.