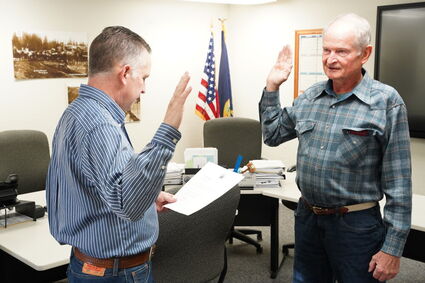 Claude Burlingame was sworn in this week as Sanders County's newest commissioner. Burlingame will fill the position vacated by Carol Brooker at the end of last year, serving until the 2022 general election is decided.

"I've been around the commissioners a long time, becoming familiar with the day-to-day routine of that job," the 73-year-old Burlingame said Monday after being sworn in by Commissioner Tony Cox.

Burlingame moved to Sanders County from Missoula in 1977. "I like the mountains, the trees, the clean water, that there is lots of public ground and that people can still be good neighbors to each other. Burlingame served as Sanders County Attorney from 1980 to 1988 and has been an attorney for more than 47 years. He has also served as an advisor to the commissioners for the last few years.

As an attorney, Burlingame said much of his practice has focused on real property issues, including roads, easements and deeds, issues similar to what commissioners have to consider. "My law career has always been in a rural setting, and I have always been dealing with city and county governments."

When asked what issues in the county he would like to address as commissioner, Burlingame mentioned the damage created by the wildfire in Thompson Falls in the summer of 2021, as well as the air quality issues that came with that, noting that allowing fires to burn creates similar affects as that of cigarette smoke. He said he's not sure how to solve the issue but would like to look into what the county can do to help with forest management.

Burlingame also said roads and prioritizing projects also interests him, noting that he will review how the projects and funding has been prioritized in the past.

"I'm determined. My whole personality is based on getting to the bottom and to the truth," Burlingame said of his philosophy. "I'm going to keep an open mind, listen and be open to all ideas.

Burlingame said he is unsure if he will file as a candidate to serve the remainder of Brooker's six-year term, which ends in 2024.