Plains jail to get facelift 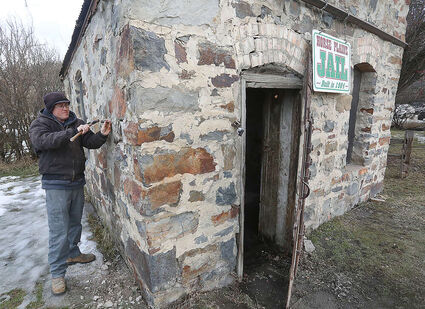 CHIPPING AWAY – Tony Ferlan chips out old mortar at the old Plains jail.

The Town of Plains doesn't plan to use the old jail on McGowan Street for "guests" anymore, but they don't want it to crumble to the ground either, which is why they hired a mason to replace the old mortar between the stones.

"I didn't want to go over there one day and see it collapsed," said Mayor Dan Rowan, who said the town council allocated $12,000 for the building to be repaired, which at this point calls for all the mortar to be removed and new mortar inserted. Rowan said that even though the jailhouse is off the main thoroughfare through town, it's still a piece of the town's history and he wants to keep it preserved. "It's come to the point where the mortar has deteriorated and not doing its job anymore," said Rowan, who had noticed that water leaked under the front door. Recently, the water turned into a sheet of ice halfway across the floor. The mayor said water inside could possibly damage the cement floor and the building foundation.

The jail was built in 1904. Rowan said it was probably just a temporary holding until a prisoner could be transferred to Missoula. Police Chief Shawn Emmett believes the town stopped using it when the jail was constructed in Thompson Falls in 1907.  In 2018, Sanders County transferred ownership of the local jail to Plains. Volunteers from the Plains Lions Club, including Rowan, fixed the roof two years ago, and some 10 years ago the chimney was repaired. The mayor said that the jail is one of the oldest structures in Plains.

"It's going to be a long tedious job," said Tony Ferlan, who has been a mason for about 10 years, although this is his first historic building. "This is really neat. I'm enjoying the heck out of it. You can step back and look at what you've done. You can see the production every day," said Ferlan. The 39-year-old Plains man said he was a little intimidated at first because of the historical significance and he didn't want it to fall over while he was working on it. Rowan couldn't recall when any mortar work was done last, but said it's probably over 20 years ago.

Ferlan works on the building a few hours each day nearly every day, depending on weather, which affects the mortar mixture. He said that when mortar freezes, it loses its strength and turns to dust. The front of the building is nearly 16 feet high and about 15.5 feet wide with one five-foot tall window and a 300-pound steel door. The structure is 19.5 feet deep with a second window on the west side. Both windows have steel bars, but Ferlan won't have to do any work with the bars or on the inside, where there is a steel barred cell, a wood stove and two cots. Rowan said they need to install some type of drainage system to keep the water from going under the door and into the building. At some point, he'd like to see some work done on the inside, but said it depends on the town budget.

Ferlan said people constantly stopped and asked what he's doing. "I don't know how many people stopped and said, 'are you breaking somebody out,'" he said. One man was angry and told him they better not be tearing the building down.  Ferlan doesn't mind talking to people because he said he can work and talk at the same time.

Ferlan would like to remove all the old mortar first, but he's concerned that if he takes out too much, the walls would be weakened and maybe even fall over. Instead, he does portions of the building at a time, replacing a portion of mortar with new material before moving on to the next spot. He's working on some of the worst areas first. He has taken mortar out from spots ranging from about two inches to about 16 square inches. Some of the gaps between stones are small while a few go as deep as eight inches into the 20-inch thick walls. He found a six-foot long crack on the front right corner of the building with a hole in the middle that runs about seven inches deep. He might have to find some rocks to fill the larger holes rather than filling them with just mortar. He thinks that when they erected the building over 100 years ago, the builder probably used rocks from the area.

Ferlan was not impressed by some of the mortar work that previously had been done. He said there are a few spots where it looked like someone just put sand between the stones and covered it with a little mortar. In some places someone spread mortar across the large stones. "That's a shame because you can't really see the workmanship of the stonework," said Ferlan, who also installs sprinkler systems and owns "Tony the Tree Guy" tree and shrub nursery at the end of Helterline Drive.

Ferlan is using a hammer and chisel for most of the work, but he plans to utilize an air chisel and compressor and an angle grinder with a diamond blade in some places. He has scaffolding set up to reach the high areas. He plans to put a tarp over the scaffolding and put a propane heater inside to keep the mortar he's mixed up from freezing. He said the hardest part will be replacing mortar around the 115 bricks over the door and two windows. He wants to try to keep the bricks from coming out before inserting new mortar. "I think if one comes out, they'll all come out and that'll make it harder," said Ferlan, who figures he'll have around 200 hours into the project by the time he's done in April.

Rowan wished the jail was at a different site, where it would be more readily visible by the general public, but he believes it would be impossible to move without destroying the building. "It would be nice to have it over by the log schoolhouse, but I don't think it could be moved without it coming apart," said Rowan. He'd like to have it open during the summer, but there would probably need to be a volunteer on hand when open. "It's part of our history and our heritage here," said Rowan. "We need to save it."