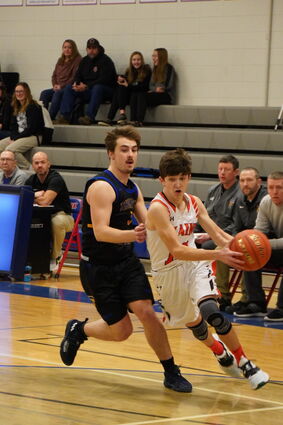 Zayden Allen of Plains dribbles against Thompson Falls' Jesse Claridge during the loser-out matchup at the District 7B tournament in Bigfork.

The Blue Hawk basketball teams took similar paths to earning a trip to the divisional basketball tournament this weekend in Ronan, with both teams finishing fourth in the District 7B championships in Bigfork.

The Hawks then played Bigfork in the semifinal round Friday evening in front of a packed house of Thompson Falls and Bigfork fans. Bigfork was up 18-9 after the first quarter and 29-13 after an intense first half. In the third, the Hawks gained on the Vikings and junior Jesse Claridge sank a three at the buzzer. The Hawks lost 57-32 and moved to the consolation bracket as Bigfork would move on and win the championship. Schraeder again led the Hawks against Bigfork with 10 points, Wilhite scored nine, Claridge four, Ferris three and Dorscher, LeCoure and Cooper each scored a basket for Thompson Falls..

In the consolation round, the Hawks beat Plains 64-27, moving on to the finals to play for third and fourth. In the game against the Horsemen, the Hawks were up 17-7 after the first quarter and 41-10 at halftime. Thompson Falls held on to the lead throughout the game, ending the third 50-13. Every Blue Hawk scored in the win against Plains, with Scraeder leading with 18 points, Claridge scored eight, Wilhite and Dorscher seven apiece, Childers and Ferris five each, LeCoure, Cooper and Tessier four points each and Alex Menzel added two.

The Hawks then moved on to the consolation final to battle Mission to decide third and fourth place.The Hawks fell to Mission 79-41, but The Hawks faced off against Mission, losting 79-41.

"There were some good things and things we can work on," Blue Hawks Coach Jake Mickelson said. "Mission and Bigfork are both really good team." He added that Mission was hard to beat when Zoran LaFrombois was on fire, scoring 44 points for the Bulldogs against Thompson Falls. "Offensively they played more run-and-gun and we weren't going to score with them like that. For us to beat them we need to make them play more our style."

Schraeder led the scoring effort against the Bulldogs with 12, Claridge and Cooper scored 9 each, LeCoure four, Wilhite and Tessier three each and Dorscher one point.

The Hawks are hoping for productive practices this week before heading to Ronan for the Western B Divisional tournament. "It will be fun to get out of town and see how we mix it up with the other district," Mickelson said. "We need to work on our press break and make sure we're taking care of the ball, but we'll be ready to roll. It will be a big tournament atmosphere."

Mickelson added that the Thompson Falls pep band will be making the trip to Ronan to help energize the crowd. The Blue Hawk boys play Florence in the first round, setting up family night for Mickelson, whose younger brother plays for the Falcons. That game tips off at 3 p.m. Thursday at the Ronan Event Center.

The Lady Hawks had a similar pattern at the district tournament, receiving a bye in the first round as the No.-2 seed and meeting Eureka in the semifinal round Friday afternoon. The Hawks took an early 11-9 lead in the first quarter as an aggressive Eureka team racked up seven fouls before taking the leading 13-12 as the buzzer sounded. In the second quarter the Hawks were again able to take the lead as Eureka continued piling up fouls. Thompson Falls senior Maliyah LeCoure made a free throw to get within one point of the Lions late in the second quarter, but Eureka went into the locker room up 28-25 at halftime.

The Lady Lions widened the lead as the second half started, keeping the Hawks scoreless as Eureka added four points to the board. Again the Hawks were able to get within one point of the Lions, but Eureka held the lead and beat the Hawks 50-40.

Thompson Falls then moved to the consolation bracket, where they met Plains for an early Saturday morning game. The Blue Hawks got several steals in the first quarter, scoring 13 points before the Trotters got on the board. The Hawks kept increasing the lead, going into halftime 36-15 and ended the game with a 69-29 win. The Lady Hawks advanced to the consolation final against Mission, just as the Hawks boys did. The Hawks fell to the Bulldogs 62-35, but they secured fourth place at the district tournament and earned a trip to divisional this weekend in Ronan.

Coach Chadd Laws was happy with his team's effort at the district tournament. "We didn't play our best, but we will figure out how we can get us to execute the way that we're capable of, paying attention to details on defense and offense and taking care of the basketball."

The Hawks were without junior Ellie Baxter on Saturday, who was taking care of an injured knee. Baxter said her knee was hurting quite a bit during Saturday's game against Eureka, so she decided to sit out on Saturday. She said she'll be ready to play at divisional. "We learned a lot and were humbled at district," the junior said. "I think it was a little rough. We just need to keep our energy up the entire game and play how we know how to play. We just have come together as a team." The Lady Hawks will open the Western B Divisional tournament against Loyola at 6:30 p.m. Thursday.

"I'm looking forward to divisional," Baxter said. "Against Loyola, we need to close out on their shooters. They have really consistent shooters and that taught us a lot for other games. We need to run our transitions better and play as a family and have a fun tournament." 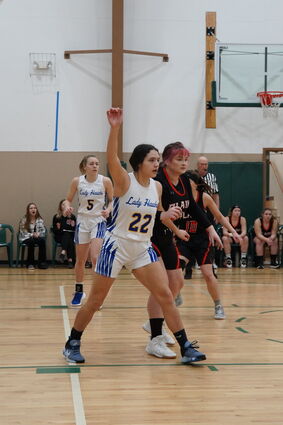 Blue Hawk Cheyla Irvine gets ready for a pass as Krystena Boes of Plains defends the basket. Thompson Falls won 69-29.

"Everybody in the divisional tournament is on the same playing level," Laws said. "We found a way to advance and district is in our rear-view mirror." He said he was thankful for all the community support at district and that it was great to see fans travel to Bigfork. "That always makes me feel good," Laws stated. "It helps they players, too, and they appreciate it."