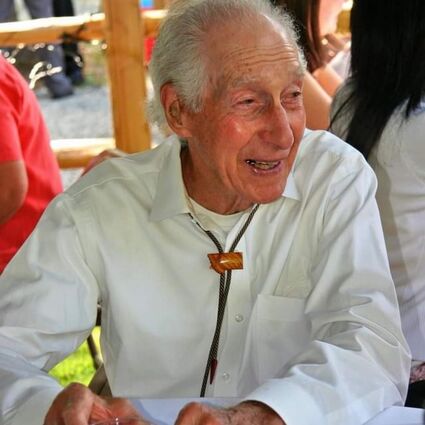 Harris Wiltzen passed away peacefully in his sleep Sunday, February 13, 2022. He was 99 years old.

Harris Anthony Wiltzen was born in Minot, North Dakota in 1922 to Anthony "AOK" and Annie (Lawrence) Wiltzen. He was the third of three children and had two older sisters, Fern and Amelia. Harris grew up in Deering, ND and started school at the Dakota College of Forestry before he enlisted in the Army Reserve Corps in 1942 and was called to duty in 1943. Harris became a high-speed radio operator. He served in New Guinea, Southern Philippines, and Luzon in WW2. After four years of service, he was honorably discharged in January 1946.

He met the love of his life, Estelle Malaterre, in Minot, North Dakota, before he started his service. After his discharge, he and Estelle were married August 11, 1946, and moved to Missoula, Montana, where Harris finished his degree in Forestry. In the summer of 1947, Harris and Estelle manned the lookout at Scalplock Mountain in Glacier National Park, allowing the young married couple time together in the mountains.

Many that knew Harris knew that he was a smoke jumper in Montana. As a member of this elite group, probably the most specialized in the fire service, he jumped out of Missoula during the 1948 fire season. Prior to his death he was the oldest living member of those that worked in this unique approach to remote area firefighting.

Harris and Estelle added two children while Harris was still in school, and their family grew to six children over the course of the next 14 years. Soon after graduating from the University of Montana in 1951, Harris started his career with the Soil Conservation Service in Circle, Montana. His work with the SCS combined his love of nature with his passion to share knowledge with landowners about managing their forestry and agricultural endeavors. Harris and Estelle moved from Circle to Scobey, then Malta, and finally to Plains, MT where he worked for the SCS until he retired in 1980.

In the early 70's, while living in Plains, Harris and Estelle purchased two tracts of property in the Trout Creek/Noxon area. Harris established tree farms on these tracts and managed these forests for more than 40 years, thinning diseased and crowded trees and selectively logging to maintain a multi-age forest. He was able to spend more time working his tree farms after he retired. It was a common sight to see him splitting wood at his home in Plains with a mall and axe as he built wood piles with firewood stacked neatly as high as the eaves of his garage. In 1984, Harris received the Montana Tree Farmer of the Year award. From 1992 to 2002, he was an advisory member of the Sanders County Board of Supervisors, and was awarded the Life Achievement Award by the Montana Tree Farmer Association in 2004.

Soon after his retirement, Harris took up running in local races and kept up this activity well into his 70's,

typically placing very high in his age group in most races. His other passions included hunting, gardening and growing fruit trees. Harris and Estelle spent many hours over the years growing and harvesting vegetables and fruit for their family. Harris was also an avid outdoorsman and spent time hunting, canoeing and fishing in Sanders County and other areas of Montana with his family and friends. Throughout his life, Harris was very proud of his children and took special joy in his many grandchildren and great grandchildren.

A Memorial Mass is planned for Harris at St. James Catholic Church in Plains on Saturday, April 2, 2022, beginning at 11 a.m.

Condolences & memories may be shared with the family at http://www.dahlcares.com.