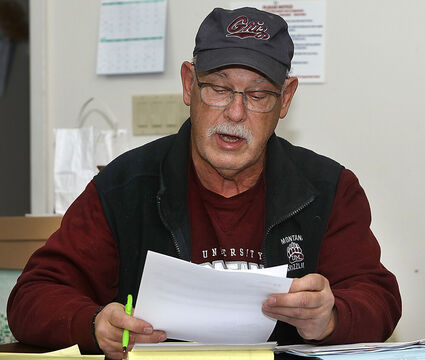 The Sanders County Sewer District at Paradise Board is getting one step closer to securing land for the proposed sewer system.

The five board members discussed a proposal presented to them by Bridger Bischoff, something the board has been waiting for and a crucial step to showing the five funding agencies that they are making progress. Board member Don Stamm read Bischoff's proposal. He would like $276,375 for the 6.03-acre plot located on the northeast corner of Paradise just below the Paradise Center. Bischoff wants $50,000 earnest money, 40 transferable free hookups, and for the buyer to pay for the survey, which he said the county still hasn't paid for when Rocky Mountain Surveyors did the first piece of property, which is $7,500.

There was resistance about the proposal among board members. "I got a problem with almost everything on the proposal," said board member Terry Caldwell, who believes the board should get an appraisal done on the property. However,  board chair Janice Barber said they have no money for an appraisal because the funding agencies have frozen assets until progress on the project is made. Caldwell believes that the $45,833.33 an acre that Bischoff cited is "totally unreasonable."

"There's no way it's going to pass the muster in the public," he said. Board member Dewey Arnold also voiced his objection to the free hookups. He said he'd like to negotiate the land deal only and do away with the 40 hookups.

According to plans for the project, all residents get free hookup if they do it when the system is put in place. An agreement was made with Bischoff in the first agreement to give him the hookups as an added incentive for him to sell property for the system. One of the primary protests in town has been that residents don't want to pay $185 in added annual taxes for 40 years to pay off a $770,000 Rural Development Loan, part of the sewer system package. If the project doesn't include the 40 Bischoff hookups, the residents would then be obliged to pay around $277 annually for 40 years.

"I move to accept Bridger's proposal as a draft MOU with the clarification as to sewer connections, price and earnest money and I would add any other changes as necessary before it's finalized," motioned Stamm. The motion was seconded by Barber, who also voted in favor of the motion, along with Stamm and Janie McFadgen. Arnold and Caldwell voted against it. After commissioner Claude Burlingame, an attorney, made some minor suggestions, Stamm withdrew his motion and made a second motion with minor revisions.  It was again seconded by Barber, but this time the board voted unanimous for it.

"If we accept it the way it is, it's going to be another battle with the public. I signed up for this board to get the board and the public united. I think Bridger asked for the moon," said Caldwell. He also felt the board has already spent around a half a million dollars on a design done by Great West Engineering that can't be used. "Everything is going to have to be re-engineered right from the start to the finish, so that everything we did up to this point is invalid." He believes the board needs to hold Great West accountable for what they've done. "If they were to spend another half a million dollars to engineer this, we're not going to have enough money to build a system, so it's going to take us holding Great West accountable for what they did wrong and have them engineer this on their pocket, and and it needs to be done," he said.

Stamm and Barber planned to meet with Bischoff to discuss a counter offer. A special board meeting had been scheduled for Tuesday, March 15, at 6 p.m. at the United Methodist Church clubhouse in Paradise.

Last week's near two-hour meeting was attended by a dozen community members and Commissioner Glen Magera, who attends most of the meetings. LeeAnn Overman spoke her about the project being pushed on the community and once again cited that two-thirds of the residents don't want the system, including herself. She insisted that it go before the people before any contract is made or any money is paid to Bischoff.

"I would like to have this on record that this is supposed to be about Paradise and the people and what they want, and I want it on record that Glen is pushing for this, so is Claude, and I understand this," said Overman. "They want this to go through no matter what, but what it boils down to is what the people in this town want." She also wanted to know why the board met last Thursday at the American Legion without public notification. Barber said they had planned to meet quickly just to discuss the land proposal due to the critical time crunch put on by funding agencies, but decided to cancel the meeting when it was brought up that the public hadn't been notified. It was there that Barber resigned from the board. She quickly rescinded, but at the regular meeting she announced that she would give the board two more weeks and then resign.

Caldwell brought to the board's attention that the money owed to the water board is much more than originally thought. Water board member Katy French discovered an additional $18,000 owed, which brings the total to around $42,000. Caldwell also noted that instead of going to the water board, the start-up money the board received should have come from the county, he said. In addition, there was no contract or otherwise written agreement for the transfer of money.

The board's next regular meeting is scheduled for April 12 at 6 p.m. at the clubhouse. They plan to discuss the bylaws and availability of an attorney to help with land negotiations.