Thompson Falls students performed the play "Johnny Appleseed" for classmates and community members last week in the junior high gym. Missoula Children's Theatre (MCT) and Thompson Falls Schools have been working together to bring theater opportunities to students for the last 40 years. This year alone, MCT has worked with 65,000 children in more than 1,200 communities in all 50 states and 17 countries.

"Auditions are open to anybody in K-12, but are limited to the students who live within our school district," said teacher Amy Laws. "We had 80 kids try out this year, which was huge. We were able to cast 64 kids for the play."

Johnny Appleseed is largely based on the story of a real person named John Chapman. Johnny, played by Isabella Buchanan and Easton Deal, and his apple seeds, along with the rest of the cast, brought entertainment through song and dance for those in attendance at Friday's two performances.

"When you watch the first night of practice, it's truly amazing to see what these kids can do," Laws said. "They only have five days to rehearse. The directors have it down, they're really good at what they do, it's an art."

Laws, who has been helping manage the plays for the last 12 years, says she participated when she was younger and her own kids were in the plays when they were in school. "This is a chance for the students to see and be a part of a theater production," she said. "It's amazing to see all the grades come together to perform." 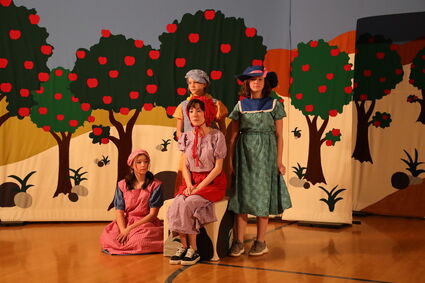 MCT relies on donations to continue touring and in previous years, Laws said the school has relied on a grant to help contribute. While that grant is no longer available, Laws noted that's when the school has to charge admission. "Charging admission helps bring them back every year," she said. "For some students, this is the only theater opportunity they get."

MCT chooses their plays for the year. "We try to get a play that the students haven't done before," Laws said. "We haven't had a repeat in 15 years."

While there was no stage this year because of the size of the gym and no makeup because of COVID-19, Laws says there are still many facets when it comes to bringing the show to life. "Karen Dwyer is doing the piano accompaniment," she said. "She's been doing this for around the last 20 years and she's amazing at it." Laws also noted Principal Len Dorscher has done a lot to help behind the scenes.

"From a parent and a teacher standpoint, for my kids and my students, this is a really valuable opportunity for them," Laws said. "This is something they look forward to every year."