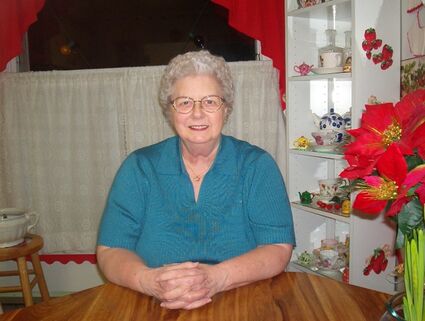 Frances Eileen Schenck passed away on April 22, 2022, at her home in Clark Fork.

She was born March 1, 1940, to William Jacks and Nora (Sand) Jacks in Missoula Montana.

Frances was a railroad worker's daughter, which meant they moved to several locations during her youth. Eddy Montana was her favorite place, she talked numerous times over the years of the fun and adventures she had with her best friend Denis. Frances also spent some time living in towns between Sandpoint and Plains in the Clark Fork River Valley.

Frances married Albert Schenck, June 30, 1958, in Thompson Falls Montana. Like her father, Albert worked for BNSF, they too moved around throughout the Clark Fork River Valley between Thompson Falls and Clark Fork, Idaho, raising five kids along their journey.

Frances worked several small jobs in her life. She worked for the local library and at a meat processing facility in Bonners Ferry. Frances was a mother extraordinaire and always went above and beyond to provide a wonderful home for the family. Frances was known (Like Albert) and respected worldwide through the AA community. She sent thousands of homemade birthday cards during her lifetime to everyone she knew.

Frances was preceded in death by her husband Albert in 2017, her parents, a brother, daughter and granddaughter.

Private family services will be held at a later date. Memorials or flowers may be made to the charity of your choice in her name.