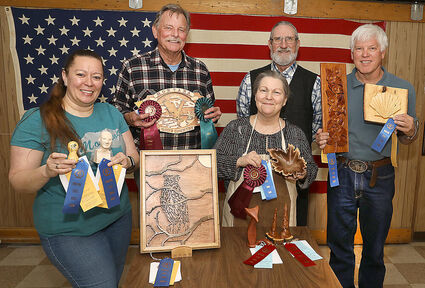 WINNERS – Members of the Plains Wood Carvers Club show their ribbons and work after a major show in Missoula. From the left: Heather Allen, Sean Ryan, Janet Brandon, Tom Collins, and Darrell Sorenson. Collins didn't have his carvings with him.

A group of Plains residents took part in the Montana State Wood Carvers Show earlier this month and came home with numerous awards for their work.

"I'm so bloody proud of them. They did a great job," said Tom Collins, who heads the Plains Wood Carving Club and was the main coordinator for the annual show in Missoula for the sixth consecutive year.

"I was surprised. It was the first time around for me and I didn't know what to expect," said Sean Ryan, who fetched a Best of Division and a Best of Class in the novice category for a scroll saw piece titled "Montana - God's Country." His accolade meant that next year he'll have to compete in the intermediate class, said Collins. Ryan has been carving for about three years. It was a hobby he took up while recovering from a back injury in California.

Ryan was one of five Plains club members to participate in the show, May 7-8 at the Missoula County Fairgrounds. Collins said there were 80-90 carvers from Montana, Idaho and Washington with 155 entries from novice to expert. They also had a youth skill level. Plains had no youths in the show this year, but Shay Nelson, 12, recently joined the club and plans to enter something next year. The carvers are judged on workmanship, creativity, anatomy and shape, detail and presentation. There were entries in the categories of carving, turning, scroll saw, pyrography, gourds, computer assisted carvings and stone, antler and metal.

Ryan also nabbed a blue ribbon for his 12x16-inch scroll saw piece "Owl," which he made out of red oak. He has been working on a six-inch tall piece he calls "Birdman" that he might have done for next year's show. His wife, Karen, also carves, but didn't have anything for the show this year. "He's competing against the big boys now," said Collins. "He'll have to get a bigger saw," added Collins. Ryan plans to enter his work in the Sanders County Fair this year. He's presently working on a four-inch tall lumberjack for next year's Missoula show.

Janet Brandon had to move from novice to intermediate last year by winning Best of Show in two classes. This year, in the intermediate category, she took a Best of Division with a walnut leaf-shaped bowl that took her years to complete. "I was very excited that the leaf took the Best of Division," said Brandon, who's been carving for about 20 years, which is how long ago she started the bowl. "I'd work on it, put it way, work on it again, then put it away again. I'd work on it until it was too hard on my hands. It's an extremely hard wood," said Brandon. She said that she put the last lacquer on it three days before the show. She also took red ribbons with "Stylized Trees" of bark and with her seven-inch tall "Stylized Fox" that she made from cedar.

Darrell Sorenson took home first place in the novice class with a blue ribbon he got with a relief carving of "Flower," which he created out of mahogany wood. Sorenson has 25-30 hours in the 19-inch tall relief. "I was really happy it won because and I saw some flaws in it," said Sorenson, who has competed in Missoula for three years. The flaw he said he saw was in the finish, not the carving, and he remedied the piece after he got it home.

Sorenson also received a blue ribbon with a relief of a clam, which was an 8x9-inch piece done in basswood. He said he spent only about five hours working on the clam relief, which had less detail and was made from softer wood. Sorenson has been carving on and off for about 10 years, but he's been a serious carver for three or four years. He took a Best of Show with a walking stick carving last year. He's thinking about carving a lumberjack for next year.

Heather Allen has been a carver for less than a year and took blue ribbons with both of her carvings. She entered her "Face in the Round," a head and shoulders piece, and "Mr. Peanut," without his well known top hat. Both were made from basswood. She's working on a horse head relief carving for next year. Allen had put about six hours into Mr. Peanut and around 30 hours in the other one. "I had no expectations to place. It was a pleasant surprise that I was awarded a blue ribbon for each piece," said Allen.

The Plains Wood Carving Club meets at the VFW in Plains each Tuesday from 6:30-8:30 p.m. to work on their pieces. They often watch an educational wood carving video. The club began some 30 years ago and has met at several different locations over the years. They presently have about a dozen members. The club doesn't have dues, bylaws or officers, but Collins has been the unofficial leader.

Collins has been a carver for about 10 years and now competes in the expert class, taking three red ribbons at the show. He had two relief carvings, one that was a band of horses with a roper in the foreground readying to rope a horse. His second relief was a western still life of cowboy boots and hat. His third entry was a carving called "Loose Fit," a 14-inch tall piece of a man with loose filling trousers and shirt. The man had no face. Collins said he wanted to emphasize the detail of the clothing. All three of his were done in basswood.