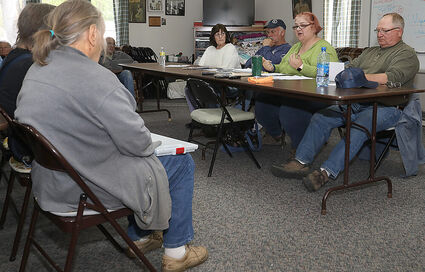 SPECIAL MEETING – Janie McFadgen explains her problems with the county commissioners' offer of $550,000 toward the sewer. From left are Pernel Elaine Chapman, Dewey Arnold, McFadgen and Terry Caldwell.

The Sanders County Sewer District at Paradise Board turned down the county's gift of the $550,000 for the proposed sewer project, which would have eliminated the annual $185 tax a year for 40 years for every property owner of Paradise.

Nearly 50 people attended a special board meeting at the United Methodist Church clubhouse last Tuesday evening, when the board met to address the offer from the Sanders County commissioners. Board member Terry Caldwell said he was against it because the offer didn't completely cover the $770,000 loan, but Commissioner Tony Cox said the remainder of funds would come from the money Paradise resident Bridger Bischoff agreed to pay to extend the new system to his future subdivision. "Between the county and Bridger there is no loan - zero," said Cox. "I'll never understand, anyway, they are on their own now, including the water board debt," said Cox.

"I would make a motion that we send this back to the commissioners with our questions and have them resubmit a proposal," said Dewey Arnold. Caldwell seconded the motion, and the action passed unanimously. But the commissioners have said they're not giving them any more money.

Bischoff was surprised when he heard the board rejected the offer and wanted more money. "How many times are you going to kick Santa Claus in the testicles?" asked Bischoff, referring to the commissioners' offer as a Christmas present.

Board members Caldwell and Janie McFadgen met with Bischoff earlier in the day last week and told him they wanted to pay him fair market value for the six acres needed for the sewer system, but they would not give him the 40 free EDUs for which he had asked. "The EDUs are off the table. We've already made that decision. They're not open for negotiation," said Caldwell.

Bischoff's subdivision has been a central issue in the battle of getting the sewer system in place, along with the $185 that each resident would have to pay annually for 40 years, which would have been eliminated with the board's acceptance of the $550,000. Cox, however, said that everyone gets one hookup for free and though Bischoff is getting 40 hook ups, he would have been paying for them. The board doesn't want to give Bischoff the EDU hookups, but on the other hand they believe it would be unfair for Bischoff to pay the additional funds, even if it would have eliminated a loan that would have benefited the entire community.

"We were elected to decide what's best for the Paradise community. Bridger is in our community. We need to protect him," said McFadgen, the board president, who is in favor of the system. Caldwell told the crowd that Bischoff was "pretty impressed" with the negotiations, but Bischoff said he didn't recall the conversation the same way. He wasn't impressed with the board's negotiation, but he said he appreciated their perspective and suggested that the board and the county "get a firm grasp on what the funding package requires to be able to move forward."

Bischoff said that there is no deal without the EDUs, unless the board can give him some other type of guarantee. "He wants assurance that the EDUs will be there in five or six years in the future. Well, we're not willing to give him that as a promise," said Caldwell. He said that he also told Bischoff that he can sell the land at fair market value, with easements and a right-of-way, and when it's time to hook up, he can pay the same as everyone else on a first-come, first-serve basis.

The board had problems with other aspects of the county's offer, which included a stipulation that the county oversee the administration of the project with a three-person committee comprised of Caldwell, Cox and Plains Mayor Dan Rowan. "We don't need the commissioners to take this thing over to do it. "We are quite capable of doing it ourselves. We are no longer under turmoil in the board. We're all in agreement on the board. We work together very well," said Caldwell, who blamed the problems on former members trying to "sneak things through." McFadgen said that the board is an elected body there to represent the people and it shouldn't be taken out of their hands and given to three people. "I think the decisions ought to stay with the board," she said.

Rowan was present at the meeting and stated that on a conference call last week with the grant lenders and the Montana Department of Environmental Quality, it was brought up that they do not have confidence in the Paradise board to be able to carry the project through or be able to manage it. "I'm not convinced there's any way to move forward at this point. I think there's a small glimmer of hope," said Rowan. He told the board that the American Rescue Plan Act grant of $1,437,881 would never be available again and that it's likely that the Montana Delivering Local Assistance grant of $561,005 would also be unavailable. Rowan said that the lender agents would look at the history of what took place with the Paradise sewer project and would rank them low enough so that they would not be considered in the future.

After rejecting the county's offer, the board asked for more money. "If you raise this cap to $1 million and anything we don't use, that goes back to the county," said Caldwell, who reminded Cox that he said they had $2 million in reserve funds and wanted to help.

Commissioner Claude Burlingame, also present at the meeting, insisted that even though they're getting a free system they would come up with excuses to turn it down. "The commissioners have never embarked on something like this before, but due to the serious health issues we believed that we needed to step forward and help that community and thus pledged $550,000 of taxpayer money to help them, yet they are not competent enough to digest it," said Burlingame.

The board also accepted the resignation of Don Stamm, who resigned May 23 after selling his home. Stamm said that even though he's moving to Missoula, he absolutely hoped the project would go through for the good of the community. McFadgen said they would be looking at applications to fill Stamm's vacancy over the next few weeks. The board changed the next regular meeting from Tuesday, June 14, to Monday, June 13.

Complaints also continued from people who don't want a community sewer system, but Adam Rice, a former board member, pointed out that according to the first contract, if a resident didn't want to hook up to the system, that person wasn't required to do so. However, he continued, if they change their mind at a later date, hookup would not be free.

"I can guarantee you we are not going to give them $1 million. The system was free. So now, if they don't take our offer, they lose an additional $550,000, so now there's the full $770,000 they are responsible for," said Cox. The commissioner also noted that it's likely that Bischoff will build a subdivision with or without the sewer system and he will probably not even sell the needed land for the treatment area. "Unfortunately, the current board is incapable of getting this project off the ground and that's sad for the residents of Paradise," said Cox. "That board will have effectively destroyed the project. They're looking for others to blame, but don't blame us," the commissioner said.