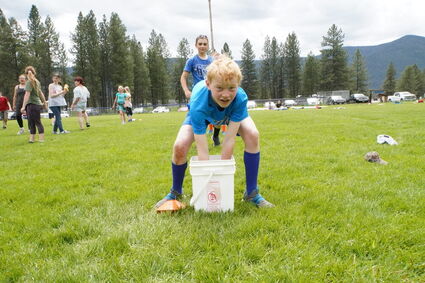 Easton Deal wets a sponge for the relay during the Thompson Falls Elementary field day.

For a moment it looked as though kids track and field day might be a wash but a little rain couldn't keep the kids from their day of fun. The first half of the day was dedicated to the kindergarten through third graders and the second half of the day belonged to the fourth through sixth graders. Many smiles could be seen on the faces of the young and old alike.

"We're doing things differently this year. In the past the eighth graders would run the event and Kindergarten through seventh grade kids would compete in the activities. This year our eighth grade kids had their end of the year field trip scheduled for today so we don't have them here to help out. The seventh grade kids really stepped up and are helping run the activities. We have a wonderful group of kids, said Morgan Owens, a junior high English teacher at Thompson Falls. "I spent a large portion of my teenage years babysitting a lot of these kids and now I'm teaching them. It's so weird!" she added.

The seventh grade and some high school freshmen coached and encouraged their younger schoolmates throughout the event. "Junior high kids are helping run all of the different events, there are junior high kids helping out over here, over there and everywhere," said Doug Padden, a long-time teacher and coach with Thompson Falls Schools. "Some of these kids run right out of their shoes and just keep running," added Padden.

Fun and upbeat pop music mixed in with giggles and laughter could be heard throughout the school grounds. Students competed in the 50 meter hurdles, clothes-pin tag, and turbo-javelin, just to name a few activities, that also included the Parachute Games. 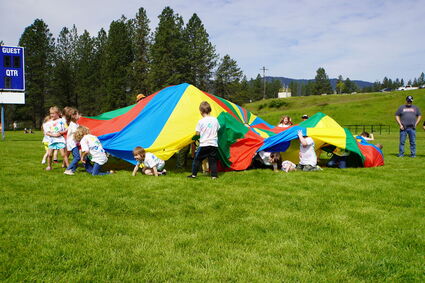 The Thompson Falls kindergarten class plays parachute games at the track and field day during the last week of school.

"There are two different games we play with the parachute. The way you play the first game is to have all of the kids stand in a circle around the parachute, everyone grabs the edge of the parachute and then at the same time everyone lifts it above their heads. Then they walk forward and pull the parachute down over the top of themselves and you get trapped inside the huge bubble of air," said Chase Helvey, a seventh grader who helped with the parachute games. "The second way to play is to lift up and create an air bubble with only two kids inside. The kids inside are the 'sharks' and all of the other kids sit around the bubble with their feet inside. The sharks go around and try to pull kids in. You also have two kids running around the outside, those kids are the 'lifeguards.' The lifeguards try to keep you from being pulled in because if you get pulled in you become a shark, but if a lifeguard pulls you out you become a lifeguard. When everyone becomes either a shark or a lifeguard that's when the game ends."

At the end of the day the kids had nothing but good things to say about the event. "I think it's a good way to get out some energy," said seventh grader Kassidy Dana. "The best part of the day was getting here early to help out and getting to use all of the equipment," added classmate Brylon Vanelswyk.