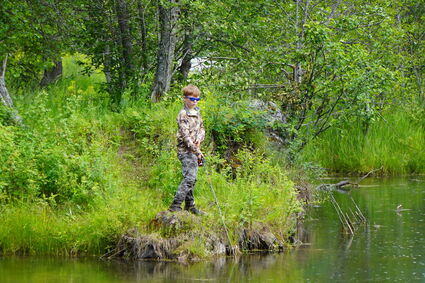 Huck Lewis of Livingston keeps his eyes peeled as he hunts for the elusive bass at Thompson Falls State Park on Saturday.

Kids Fishing Day returned to the Thompson Falls State Park Pond last week for the first time in two years. The outdoor day is not a new concept in Sanders County but is fairly new to Thompson Falls. "This is the third year we have held this event and our first year back after two years off because of COVID. We have held the annual Kids Fishing Day in Noxon for many years, and we wanted to have another fishing day that was more accessible to folks down on this side of the county," said Jason Blakney, a fisheries biologist with FWP in Thompson Falls.

In an effort to encourage kids to spend time participating in fun outdoor activities like fishing, local FWP staff teamed up with sponsors to host the event. "We had a ton of different sponsors. We had Clark Fork Bass Anglers, Cabinet Ridge Riders, Avista, Harvest Foods, Feed-N-Fuel, Big Bull Sports, and the fire department from our district sponsored everything. It was really a community effort," said Blakney.

"A big part of why we are doing this is to encourage kids to go play outdoors again," Blakney explained, and encourage they did. Barbecued burgers, hot dogs and cold beverages were provided by sponsors as well as prizes for a raffle that took place at the closing of the day's activities. Every kid's name was entered in the raffle upon registration, and at the end of the day, many fun and functional prizes were distributed. The prizes consisted of useful fishing equipment and gear like tackle boxes and fishing poles. The turnout was good, but FWP is hoping to increase participation numbers in the future. "We were hoping to have more people here, but every kid got a prize today, so that was really cool," Blakney noted.

The young fishers seemed to be having a fun and fruitful time fishing the pond. "I had fun today, and I caught 15 fish," said Emmett Blakney of Thompson Falls. "I was only going for pumpkin seed and perch because I wanted to catch a lot of fish."

Another young fisherman was camping at the park with his family when he heard about the event from locals and decided to join in. He had nothing but good things to say about the event. "The day has been good. My favorite part of the day was getting to chase a bass. I also got to catch a couple of perch and a couple of pumpkin seed," said Huck Lewis from Livingston, Montana. "The people who put on the event let me borrow a pole with an open bail reel because my pole has a button cast. I don't really like the button cast because it's really hard to cast right. I have also been practicing with fly rods. I practiced all day yesterday with my fly rod, but I didn't catch anything with it," added Lewis.

Kids Fishing Day was a successful display of community spirit and teamwork. Local parents in attendance helped promote the event and share the day's fun with the other campers who happened to be staying at the park. "It's been a really fun time," said Jamie Ellul of Thompson Falls, whose kids Colton and Peyton participated in the event. "The crowd got bigger midday because a bunch of campers didn't know about fishing day. We let them know about it, and they all registered and are here now fishing at the derby." For more information about the event, visit FWP.mt.gov.