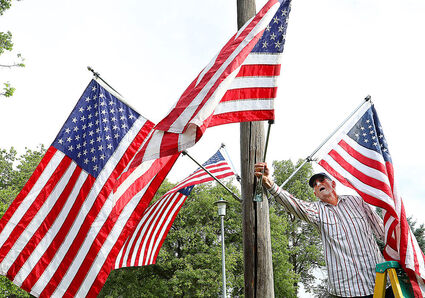 More than 60 people gathered at Fred Young Park in Plains on Independence Day to hear military veterans recite the Declaration of Independence.

Noah Hathorne, Jim Gillibrand and Hunter Fielders took turns reading the document that explained the causes of the 13 colonies' break with Great Britain in 1776. The 83-year-old Gillibrand, who served in the Army from 1958 to 1961, started the reading, followed by Hathorne, who served in the Marine Corps from 1999 to 2003, and Fielders, who served in the Army from 2010 to 2013. Gillibrand also pointed out what happened to some of the 56 signers of the Declaration of Independence during the Revolutionary War, including five that were captured by the British, 12 that lost their homes to the enemy, and nine that fought and perished in the war. 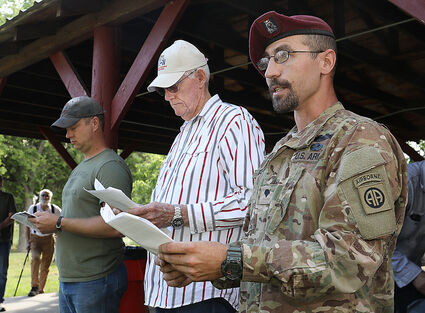 The event was put on by the Free Americans and VFW Post 3596. The VFW once again cooked hamburgers and hot dogs and provided potato salad, chips and drinks for the community from 10 a.m. to 2 p.m. Gary Jenson, a veteran of the Navy from 1970 to 1972, cooked 120 burgers and 95 dogs on the grill, as he has done for the last dozen years.

Connie Foust of the Free Americans read the organization's mission statement and Joel Banham led the group in prayer. Larry Smith, a VFW member and an Air Force veteran, celebrated his 75th birthday on Monday.

This was the first year for Gillibrand and Hathorne to read the Declaration. Fielders did it with his parents, Shawn and Charee Fielders, last year. Hathorne reflected that people are going through a lot of the same turmoil today as the Founding Fathers did in 1776. Fielders said he felt honored to have the opportunity to read the document. Gillibrand said he was concentrating on not losing his place in the reading.