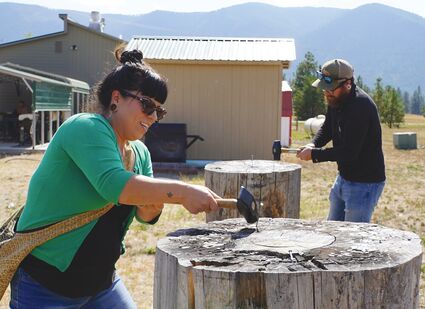 Anna and Ben Campbell of Hot Springs challenged each other to a hammering competition. Anna beat her husband in the activity.

The Clark Fork Valley Elks got into the fall spirit with an Oktoberfest celebration Saturday at the lodge in Thompson Falls.

Organizer and Elks member Beth Moore said the event hadn't occurred since 2019, and they were excited to bring the community together again. Oktoberfest is traditionally a beer festival in Germany, but Elks volunteers provided family-friendly fun including games and crafts with German polka music filling the patio area of the lodge. 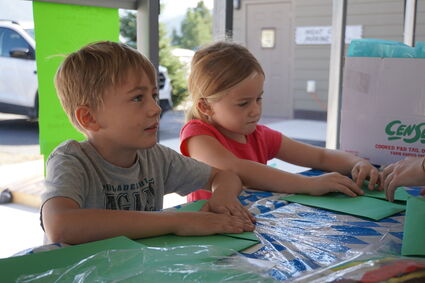 Emmett and Sage Blakney of Thompson Falls create hats during the Oktoberfest celebration at the Clark Fork Valley Elks lodge.

Along with fun and games, Elks chef RT Brown created an authentic feast. The Lodge sold soft pretzels with cheese sauce and bratwurst. Brown also did research and created a German style potato salad, which has a vinegar base instead of the mayonnaise-dressing based potato salad with which most Americans are familiar. He also made two different kinds of spaetzle, which is made of a dough similar to a pasta noodle. Brown made one version that included different types of cheeses and caramelized onions, and another version that was tossed in a house made mushroom gravy. Brown, who has been cooking at the lodge since June, said he made more than 35 pounds of spaetzle.

Elks member Ruth Cheney was serving the food and said the event was busy and people were very happy with Brown's creations.

Moore said that the Elks sold food and took donations at the event, and that all of the proceeds would go to scholarships that the lodge awards each year. "We had a lot of volunteers," Moore said, "including some high school kids who helped with the kids' activities."