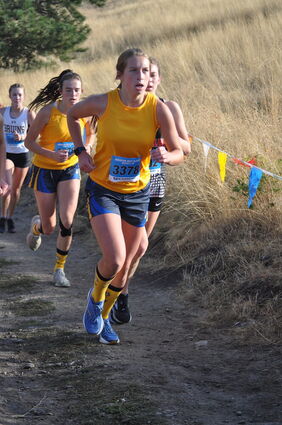 After a week of the unexpected, the Thompson Falls cross country team was happy to be back in competition last weekend at the Mountain West Classic run at the University of Montana golf course.

The high school and junior high teams had to run and train indoors last week while the smoke lingered in the Clark Fork valley. "While our runners have adjusted well to indoor training, it is still draining. Both the high school and junior high runners stepped right up, encouraged each other and worked through it," Blue Hawk Coach Sarah Naegeli said. "If nothing else, this week will make us mentally more competitive, and give our legs a bit of rest." The team was scheduled to compete in Mission last Tuesday, but that meet was canceled due to poor air quality.

As the team traveled to Missoula for the Mountain West, they were ready for competition. "One of the strong points of living and training in Thompson Falls is that our runners know how to run, race and power through hills," Naegeli said. "I love to watch this race at the top of the hill, because our runners focus on racing and passing runners on the hill every year and they are tough."

The Mountain West Classic is one of the biggest races in Montana, with more than 300 competitors in both junior and high school. "It's great preparation for the state meet," Naegeli noted, as the state meet will be held on the UM golf course on October 22.

The Blue Hawk girls ran the junior varsity race, which had 377 runners and 28 teams. Thompson Falls placed fifth among the girls' teams. Senior Ellie Baxter led the Thompson Falls girls, finishing in 21 minutes, 16 seconds, another personal record. Her sister, eighth grader Aubrey, finished eighth in 21:37. The Montana High School Association has allowed eighth graders to compete on high school teams this year, and this was Aubrey Baxter's first race with the high school team. "She ran a spectacular time," Naegeli said of Aubrey. "I look forward to her competing for the rest of the season." Faith Palmer finished in 22:25, Mollie Nichols in 23:20 and Kellyn Carr in 31:20. "I appreciate Kellyn's effort," Naegeli added. "She has been pushing herself to improve."

Junior Cael Thilmony led the Hawk varsity boys in 18:37. Naegeli said that Thilmony was pushed down about a half mile into the race, did a triple somersault and popped back up into the race. As a result, it wasn't a personal record, but still his second best time for the 2022 season. Simon Armstrong competed in his first race of the year, finishing in 22:39. JT Taylor (20:48), Blake Schusterman (22:32) and Wesley Powers (23:36) set personal records, and Brock Ryan finished second among the Hawk boys (20:03). "Our boys continue to improve and drop time every meet which is very encouraging," Coach Naegeli said.