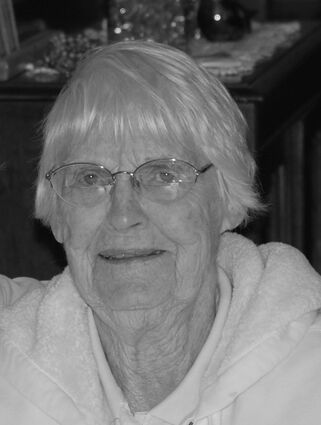 Anita Carol Wise went home to join the Lord on November 3, 2022. Carol was born December 25, 1917, in Winifred, Montana, to Carl and Oreta McCaughin. Carol married James Lee Wise on August 9, 1936. During their courtship, she blacked both of his eyes with a snowball. Lee claimed he married her in self-defense. They had three children, Wendall Hugh (Skip), Anita Lee (Peggy) and James Gary. Gary was born soon after Lee was deployed in the Navy during WWII. Carol was a full-time mother and homemaker.

Upon Lee's death in 1973 Carol became a working woman and worked until retirement at Vaughn Ragsdale store in Billings, Montana, as an alterationist. Carol was an accomplished seamstress and sewed her entire life. She also loved handwork, crocheting, and knitting in particular. Carol finally learned to drive in 1960, but always preferred walking. She once stated the hardest part of growing old was walking and not running.

Carol was a long-time member of Emmanuel Baptist Church in Billings. When Carol was in her 80s she was telling her pastor about her travels and he commented that maybe she was getting too old to travel. She quipped right back that she was doing it now before she got old. She lived her faith and was an example to many. She was always ready with a joke and a laugh and made friends wherever she went. She had an incredible memory well into her nineties and could name every child in her first-grade class photo; remembering where she parked her car was another

matter. She once waited for the mall to clear out so she could find her car. Every time she visited her parents' graves, she insisted they must be moving around the headstones because she "knew right where they were."

Carol was preceded in death by her beloved husband, Lee; her parents; and her three siblings Ken McCaughin, Cee Blackler, and Maxine Lawrence; as well as her son and daughter-in-law, Skip and Barbara Wise; son Gary Wise; granddaughter Carol Wise; and grandson Scott McArthur.

Carol will be remembered for her love of family, her laughter, and her warmth. She

will be greatly missed.