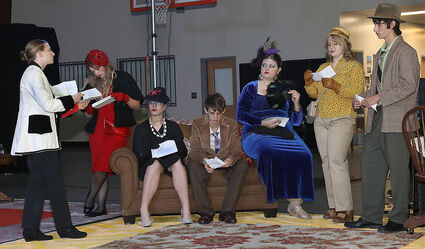 DANGEROUS GATHERING – Guests of the Boddy Mansion find out they were all sent the same invitation. Wadsworth (Mikiah Cook and far left) tells the group they are all being blackmailed. The cast includes from left: Cook, Halie Tompkins as Miss Scarlet, Mackenzie Tulloch as Mrs. White, Jacob Lulack as Professor Plum, Susannah Lindsay as Mrs. Peacock, Cecilia Harris as Colonel Mustard, and Greg Tatum as Mr. Green.

It might have been the biggest crowd for the Plains School Drama Club, which put on the play "Clue" last week in the school's new gymnasium. It was also the biggest set the students had ever constructed, said Terri Henry, the school's drama coach for more than 30 years.

"We never could have done...