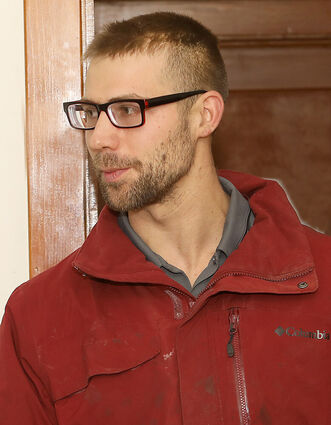 Loren Fitzpatrick introduces himself to the Plains Town Council.

Loren Fitzpatrick signed a one-year contract at the meeting, replacing Richard Gebhardt, who retired a week earlier after serving as the town attorney for 14 years. He had planned to retire in 2021, but wanted to stay and help with the town's lagoon situation and with the contract for the town's new well. His final act was with the Plains Police Commission hearing. He had also been the attorney for the communities of Hot Springs, Polson and Ronan. Gebhardt received his law degree in 1976 from the University of Montana in Missoula, the same place Fitzpatrick got his law degree in December of 2019. Fitzpatrick passed the Montana bar to practice law in February 2020.

The 33-year-old Fitzpatrick was born and raised in Polson and now resides in St. Regis. It was Gebhardt that recommended that Fitzpatrick look into the Plains contract job. He also gave Fitzpatrick a recommendation for the appointment to Plains Mayor Dan Rowan. "He (Gebhardt) informed me that he had been a municipal attorney for quite some time. As there are few attorneys specializing in representing municipalities, it was a great opportunity to learn from the best," said Fitzpatrick, who is also the contract attorney for St. Ignatius and Hot Springs. "Further, I love contract law and decided to become a lawyer while negotiating engineering contracts in Nashville, Tenn., as a reliability engineer," he added.

Fitzpatrick served six years in the Navy as a nuclear machinist mate, leaving the service in 2015 as a petty officer second class. His law practice is Fitzpatrick Law, PLLC.

"I believe he will be an asset for the town. He is already working on regular town business," said Rowan. "I am excited to assume the town attorney position. Plains' ability to acquire the sewer grant in the past was quite an achievement," said Fitzpatrick, who added that his job with Plains is a template for other municipalities going forward.