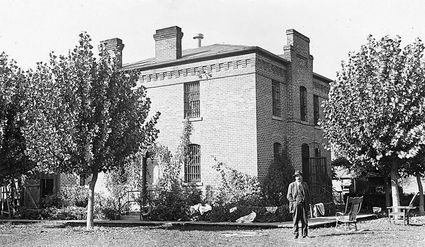 THE OLD JAIL MUSEUM was built in 1907 as the Sanders County Jail. The first floor housed the sheriff and his family and the second floor was the cell block and office.

NEW MUSEUM ON ITS WAY

"We're on our way," declared Eleanor Dickinson, president of the Sanders County Historical Society, at a luncheon meeting Friday noon at the Towne House Lobby.

Her reference was to the establishment of a museum in the old county jail. Mrs. Dickinson said that as soon as the county commissioners approve the three-year lease agreement, green thumb workers will be available through the city to begin clean-up, painting and other work to ready the museum for opening.

Dickinson said she hopes it can be ready for opening in early June.

She named Joyce Bybee and K.A. "Doc" Eggensperger to a nominating committee to propose members for the board of directors.

It is proposed that the museum be kept open a few hours for several days a week and be staffed by volunteers. The chamber is planning to open an office in the museum and Secretary-manager Diane Gibbs, plans to keep it open three days a week.

The museum would be kept open only in the late spring and summer.

Artifacts, pioneer tools and furniture, artwork and other items are being proposed for display. Mrs. Dickinson said Eileen Garrison, Lorraine Dufresne and Doris Heater will serve as researchers and historians on items loaned or donated to the museum for display.

Bill Alexander has donated his collection of David Thompson artifacts to the museum.

Last week it was the ash fallout from Mount St. Helens; this week it's the rain.

The heavy rain falling over much of Montana and all of western Montana for the past several days has created new problems for some Sanders County residents.

The rain-swollen creeks and rivers were the concern of Montana Power Co. officials this week as the river flow approached flood stage and forced abnormal action by utility employees to relieve pressure against the dams at Thompson Falls.

Sunday and Monday, MPC employees cut several steel stanchions from the main dam to permit removal of debris and large logs and even whole trees, which floated against the dam obstructing the flow of water over the dam.

Harold Crawford, plant superintendent, explained that because of the forecasted low water runoff, the steel stanchions had not been removed earlier and fewer boards were taken out of the dam than usual. This was a calculated risk undertaken to cut electric power generation losses during the runoff.

Then the Clark Fork River started swelling Saturday because of the heavy rainfall, the increased runoff floated numerous logs and debris towards the dam.

MPC personnel Monday afternoon also removed boards from the middle or dry channel – an action that rarely is undertaken to lower the pond level.

Not all of the concern from the heavy rains was confined to the dam, however.

Commissioner John Muster was keeping an eye on the Cherry Creek bridge where some fill was being washed out by the high flow. He issued an order Monday evening not to permit travel over the bridge Tuesday by the school bus. He said it appeared travel by passenger autos was okay.

Monday afternoon, the flow at the Montana Power Co. dam had reached 72,000 cubic feet per second.

The Sheriff's office received a report Sunday of a rock and mud slide blocking Highway 28 east of Rainbow Lake between Plains and Hot Springs.

The heavy rainfall also caused rocks to roll down the mountainsides onto Highway 200 east of Thompson Falls.

Water also was a problem on the Blue Slide Road where water was flowing over the road in four spots north of the D.E. Hill place Monday evening. Muster said a culvert filled up, restricting flow from Phantom Creek.

Highway Patrolman Harold Savik said water was covering Highway 200 east of Perma and that the road between Charlo and Dixon was under water also.