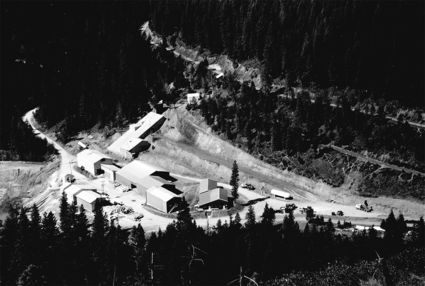 The U.S. Antimony Corp. mine.

ANTIMONY AREA IN SANDERS COUNTY MAY BE DEVELOPED

About twenty-five miles up Prospect Creek out of Thompson Falls there is a rich antimony belt. How rich this belt is cannot at present be accurately determined, since development work has been very meagre, but some mining engineers who have surveyed the ground contend that it is one of the richest belts on the North American continent from visible indications.

The antimony deposits in Sanders County have been known for the last sixty years. Old files of an 1882 paper, which later discontinued, refer to the antimony deposits on Prospect Creek. Years ago Fred Hougland (the first mayor of Thompson Falls), in partnership with Governor Dixon of Montana, and other prominent mining men of the state were interested in the old Antimony Mine on Prospect. During the first World War several carloads of the ore were mined and shipped.

There is no question about the ore being there. It is right out on the grass roots and can be blasted and picked out. All over the area rich float is found. The ore lies in blankets which are sometimes five feet thick. These blanket veins run fifty percent antimony at times and there are tremendous bodies of low grade milling deposits. Such a small amount of development work has been done that no one can accurately say what the real extent of the ore possibilities are.

The old Antimony Mine of Fred Hougland and Governor Dixon is still dormant and is now controlled by the Barto interests.

However, for the past six weeks Dave Snider of Thompson Falls, has been promoting the locations of claims in the old antimony belt up Prospect. His locating partners are Bill Cooper (discoverer of the Jack Waite Extension), Lou Thomas and Knute Kirkeberg. They are very enthusiastic over possibilities. They have taken out a lot of the rich ore, hand picking it, which runs 50%. The ore is on the bare surface in many places, in big chunks. They plan to ship a carload by August and have been offered $60 per ton on the track. After they have fully determined the extent of their claims and the ore capacity they plan development and shipments on a big scale.

Knute Kirkeberg consolidated ownership of the properties between 1964 and 1968. In 1969 the property was sold to the U.S. Antimony Corp.

Numerous claims are located on a group of antimony-bearing quartz veins near the head of Antimony Gulch. The first discovery of antimony in the area was in 1884 when prospectors were traveling up Prospect Creek to the Coeur d'Alene. Three carloads of assorted crude ore were sold in the East at a small profit, so the owners decided to treat the ore on the site. A small smelter reduced the antimony to an oxide, three cars of which were sold at a good profit. A "considerable" amount of antimony ore was shipped prior to 1906, but no production was reported in recent years. The properties were then idle until World War II. Two mines produced antimony ore in 1940, and in 1941 and 1942 four different mines were producing. Between 1940 and 1953, 532 tons or ore were shipped, containing 137 tons of antimony. The productive mines were the Coeur d'Alene, Eureka & Ellis, Interstate, Stibnite Hill, Barto and Babbit.

Thompson Falls is a prosperous mining and lumbering town located on the main line of the Northern Pacific railroad and on the Clark's Fork river, 102 miles west of Missoula. It's name was derived from the falls near the town by the river flowing through a narrow canyon and tumbling over precipitous masses of rock. These falls furnish an excellent available water power at this point, although up to the present writing this power has only been utilized for operating a small sawmill.

Thompson Falls now contains a population of 300. A number of large general merchandise stores located here enjoy a good trade with the tributary mining and lumbering districts. In the mountains 20 miles distant from Thompson Falls are extensive deposits of antimony. This is a rare mineral which, when converted into a marketable state, is useful in promoting the fusion of metals, and is used especially in the casting of cannon balls. It is also used as an ingredient in the manufacture of concave mirrors. Its use in bell metal renders the sounds of bells more clear and added to tin makes the latter metal hard, white and sonorous.

John Lawrence, owner of the U.S. Antimony mine, died June 16. His obituary can be found on page 5.