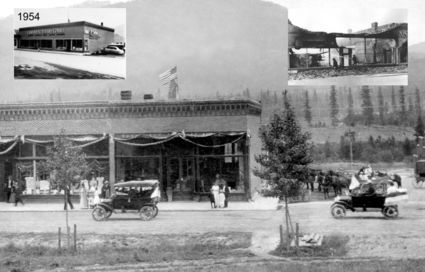 EARLY DAY picture of Larson's and Green's department store. It was where Two Rivers Grille is today. The brick wall next to Little Bitterroot Thrift Store is all that survives of the building after the catastrophic fire.

From Pioneers and Early Settlers

Henry was born June 24, 1889, at Nome, North Dakota, to Anton Larson and Julia Olson, one of their eight children.

The 1911 lists him as a drug clerk for the Thompson Falls Drug and Inv. Co.

Henry Larson and Miss Maud Sullings were united in marriage June of 1912.

In 1915, they moved to Noxon, where he was postmaster for 18 years and operator of the H. A. Larson and Co. store.

The Sanders County Ledger, July 9, 1915 – Mr. Henry Larson went to Noxon to take charge of the Peek mercantile business, while Mrs. Larson will remain here until a new house is erected for them to live in. Houses are scarce in the town of Noxon.

In 1932 he opened the Thompson Falls Mercantile with his brothers, Mel Larson and M.A. (Bob) Larson.

Sanders County Independent Ledger, May, 9, 1934 – Larsons Improve – Larson Bros., of Thompson Falls, have just completed enlarging and remodeling their large department store, and now have one of the finest and most inviting shopping centers in northwest Montana.

Splendid growth of business has called for almost double the original floor space and new fixtures and modern accessible display tables give city service and ease of shopping that might be envied by metropolitan stores.

A railed balcony cares for the office, and affords display space for larger items – while underneath is a shoe fitting alcove, slightly secluded, typical of the newest in department store convenience.

Carefully chosen stocks of dry goods, furnishings, shoes, groceries, hardware, paints and house furnishings make this such a convenient and helpful "friend in any need" that folks from 50 miles around enjoy shopping there.

In 1935 Henry and Mrs. Larson moved back to Thompson Falls. His business was operated under the name of Larson's Cash Store until a few years ago when the name was changed to Larson's and Green's, Ind.

In 1949, the Larsons adopted the five Green boys, who up until that time had lived their early lives with them. They are Phillip, Herman, Gerald, George and Alex H. (Kelly) Green all of Thompson Falls.

The Green family had been residents of Heron, but then moved to a farm east of Spokane where they raised a garden and shipped some of their produce to Henry's Noxon and Heron stores, keeping in contact with their friends. Then their two older boys, Phil and Herman, began working for Henry and Maude in their Noxon store in 1930 and also attending school. That same year their mother, Florence Green, died in a car accident in January. With the death of their mother and their father being very ill, unable to support the family, Gerald and George went to live with Maude and Henry and also began working in their store. At that time there had been a discussion of their adopting them, but the father said no, that he wanted the boys to carry his name. Alex and his sister Grace were sent to live with their half sister and her husband.

It was less than three years when a letter was sent to Henry and Maude that they were sending Alex to the Larsons to raise and to please meet the train. So at an early age, with a name tag around his neck, Alex was sent to Thompson Falls to join his brothers and his new home. After the boys were adults, they were adopted, but their surnames were not changed.

In a conversation with George Green, he stated that when the last of the boys arrived, Henry gathered them for a discussion. At that time he told them that he didn't feel was either his or Maude's place to mete out discipline and that if there was any need for it, that the responsibility would be placed on Phillip's shoulders, as he was the older brother. George, for one reason or another, had to face his brother for punishment, which he thought was quite severe. But he said there was never a reason for another lesson. He also said, "No finer, or more caring parents, whether by natural or adoption, the Larsons cared for all of us as their own."

Front page, Sanders County Ledger, February, 1968 – Fire completely destroyed Thompsons' oldest and largest retail establishment Larson's and Green's Inc. The fire was first noted when a transformer on an electric power pole at the rear of the building exploded and flashes of light awoke Matt Marich and Duke Sallee, who lived nearby.

Leveled by flames were the grocery, dry goods, appliance and hardware departments of the firm. Flames exploded through all the smoke and engulfed the interior. Working from the roof of the Post Office (now Little Bitterroot Thrift Store), volunteer firemen kept the post office and The Ledger office cool with water, so they were saved.

Volunteers evacuated the equipment in the Ledger building and the Post Office. Mail was scooped out of the boxes in clothes baskets and put under lock and key. Motors Garage also was evacuated (it was located across the street where the new Baptist Church now is). When Doc Eggensperger arrived at the fire at 2:15, all the galleys for Wednesday's paper were lined up on the sidewalk by the building where the laundromat is in now. They were carried back in the morning and the crew had the paper out by 3:30 p.m. Wednesday.

Mrs. Mike Miller opened Norm's Café by kerosene lantern, as the electrical service on Main St. was all knocked out. With volunteers she served free coffee to the firemen and other workers. The Jayceens set up a coffee bar at Motors Garage. Explosions were heard for five hours as ammunition and paint exploded.

This building was first owned by Lenahan and Goodchild. They had a frame shack on the river behind the E.H. Davis cabinet shop, which was the first store in Thompson Falls. They moved this to Main St. (Railroad St. then), and built a brick building beside it. When they tore the shack down they added to the existing brick building. This constituted the building that burned. At one time it was the A.C.M. company store.