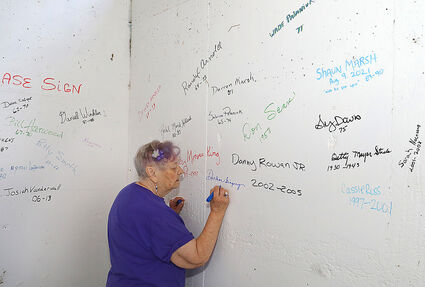 Just over 100 people gathered at the Paradise Center last weekend for the "Second Annual Student Reunion for the Paradise School." Dave Colyer, the primary organizer of the event and a Paradise Elementary School student from 1962 to 1970, believes they might have had twice the number of former students as last year.

The Paradise Center opened its doors Saturday and Sunday afternoon for the alumni and their friends and family members. Colyer believes there were about 60 former Paradise students at the former school throughout the weekend. Greg Stephens, 49, might have been the youngest alumni at this year's reunion. Traveling from Newman Lake, Washington, Stephens attended the school from first to eighth grade, graduating in 1989, said his mother, Judy Stephens, who attended the school in the early 1950s, along with her husband, Cliff, her school sweetheart. "I really liked it. I think it'll get a lot more popular as the years go by," she said.

The Stephens family is no stranger to the schoolhouse. Their daughter, Brenda Offerdahl of Plains, graduated from eighth grade there in 1984. Judy taught music and was a Title 1 teacher at the school in the 1970s. Her sister, Shirley King, taught kindergarten in the 1980s and their siblings were students there. Judy's aunt, Sig Ostby, taught at the school in 1944 to 1945 and her mother, Agnes Helgeland, taught primary grades at Paradise from 1986 to 1988. Cliff's siblings were Paradise students, as well as his niece, Sydney Connolly of Plains.

The oldest alumni was Betty (Steele) Meyer, who recently turned 98 and is still going strong, she said. Like most of the other alumni, Meyer and her daughter, Kathy Gotham, both still Paradise residents, toured the 112-year-old brick schoolhouse Sunday. Gotham attended only the first grade there in 1950, but her mother was a student from first grade in 1930 to eighth grade in 1939, having to repeat first grade. "I was a wild kid. I could never sit still and I wasn't the brightest match in the box," said Meyer, who recalled that her brother, Merle, used to carry her and her sister, Ruth, across a large puddle of water that formed every spring below the school. Her other brother, Dick, also attended Paradise. She said her grandfather, Orlando Steele, was the school's first janitor when it was built in 1910.

Another attendee with a long history with the school was Karval Pickering, 83, who had numerous family ties with the school, including her daughter, Karen Willougby, one of the last teachers at her post when it closed down in 2013. Pickering started first grade there in 1944 and graduated from the eighth grade in 1952. She became a substitute cook in 1963 and later was the school clerk for over 30 years before being elected as the school board chairperson, a position she held until 2016. Her father, Jerry, was a student from 1924 to 1928. Her mother, Vivian, was the school's first cook when they went to hot meals.

On Saturday, Pickering presented a special keepsake to Bobbi (Parrish) Oberst, a student from 1945 to 1953. She gave Oberst, now a Lacey, Wash., resident, a post office box door from the town's old post office in honor of her father's service as postmaster, a position he held from 1942 to 1954. Bill Parrish passed away in 1986.

Colyer said they had a larger turnout than expected on Sunday. Several people attended the event both days, including Benita Jo Hanson, a student from 1952 to 1961, who served as a tour guide speaker in the center's railroad display room on the second floor. John and Karen Thorson, Mac Hall, and Kathleen Hubka were also on hand in the schoolhouse to give visitors information on the center's mission, as was Colyer, who is now president of the Paradise Center, a nonprofit organization.

It was Colyer who came up with the idea last year to hold an annual all-class reunion. Colyer lived in Paradise from 1955 to 1978, when he moved to Plains. He moved to property just east of Paradise five years ago. Most of the former students live in the local area, but several came from outside of Montana, such as Bill Harwood who traveled from Saipan. Harwood attended Paradise School from 1967 to 1970. Visitors signed a guest book and autographed a designated alumni wall just outside the basement. Several searched for their names etched in the outside brick walls.

The alumni looked through old pictures trying to name former classmates. They swapped old stories and favorite memories of the school, students and teachers. "I remember Mrs. (Elsie) Soule was so mean," said Darrell Sorenson, a student from 1965 to 1972. "I was never a trouble maker, but I was always involved somehow," said Sorenson. He said that Soule used to draw a circle on the chalkboard with a dot in the middle where a student's nose went. He recalled once having to stand on his tiptoes to place his nose on the spot. "She broke a ruler over Randy Arnold's head," he said. Shana (Stephens) Miller, who attended kindergarten to sixth grade in the 1960s, confirmed Soule's toughness, though she said she never got into trouble with her. Chris Allen, a student from 1964 to 1972, said he "accidentally" hit Soule with an eraser when he was a second-grader. "She never knew it was me, but she was kinda livid," said Allen. 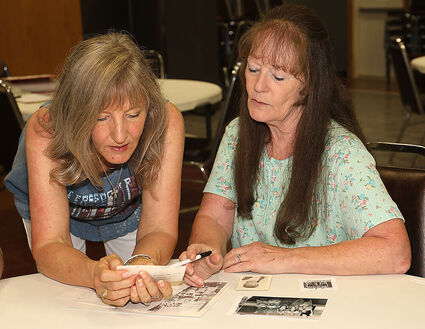 The 86-year-old Darlene (Gingery) Jolly, still a Paradise resident, said one of her favorite memories was sliding down the 30-foot long metal tube fire escape from the third floor to the outside ground. "We would crawl up it on the inside and slide back down," said Jolly, a student from 1941 to 1949. This was her first time to attend a Paradise reunion, but she plans to attend next year, too. Bob Proctor, 87 and a student from 1940 to 1949, tried to say Jolly was a wild girl in school, but she immediately set the record straight, saying she was "too chicken" to get into trouble.

The event included a silent auction of Paradise School artifacts, including train sets, artwork, old record players, basketballs, team jerseys, and three student wooden chairs, possibly from the 1940s. Colyer said they haven't totaled how much they raised, but he believed it was more than the $200 raised last year with the Paradise Bomber jerseys being the most popular items. Shanna Miller won the mystery raffle, a metal lunchroom tray used at the school, possibly when the hot lunch program started, according to Colyer. The next alumni reunion will take place on July 1 and 2, 2023.