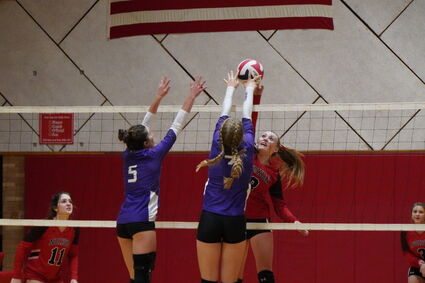 Noxon's Maygan Swanson had three aces, two blocks and one kill in the Red Devils' match against Charlo.

Noxon kicked the weekend of competition off with a win against Alberton on Thursday. The Red Devils defeated the Panthers in four sets. Against Charlo, the Red Devils lost in three sets, 25-22, 25-15, 25-17, but put up a valiant effort in the conference matchup. In the first set, Noxon led nearly the entire set, up 17-12 before Charlo came back to tie up the match and take the eventual win. Noxon again led early in the second set before Charlo tied it at 9 apiece and expanded their lead to the eventual win. The Red Devils made some good runs for points in the third set, but fell to the Vikings. 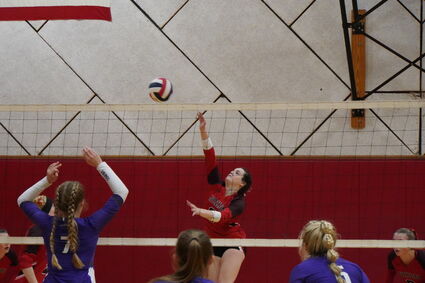 Noxon's Mia Vogel hits the ball over the net against Charlo on Saturday.

This week, the Red Devils will be on the road as they were set to travel to Two Eagle River on Tuesday (results were not available at press time) and will compete in the Mission Shootout in Ronan on Saturday.

Hot Springs then traveled to Alberton on Saturday for another conference matchup. Results of that game were not available.