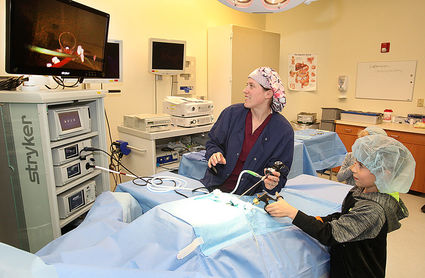 MEDICAL VIDEO GAME – Jackson Revier uses his video game skills to manipulate the picking up of a piece of candy using Clark Fork Valley Hospital's new laparoscope during a hospital open house. He is assisted by Gretchen French, a certified surgical technician at the hospital.

"The link between the worlds of art and surgery are powerful and pervasive," according to the Royal College of Surgeons of England.

Clark Fork Valley Hospital figured out a way to combine both by hosting "An Evening of Surgery and the Arts" last Thursday in an effort to highlight the Art on the Walls and host an open house for its two operating rooms and the recovery room.

"It's a good partnership," said Lisa Eberhardt, the hospital's chief nursing officer, who had hoped that the people who attended the Art on the Walls event would want to attend the open house, too. She also figured the open house might beef up attendance at the art event, and it most likely did, according to Joy Nelson, the primary coordinator of Art on the Walls. Nelson wasn't sure how many people came to the reception, which ran from 5 p.m. to 6:30 p.m. one hallway away from the open house, but she said it looked like more than usual. Eberhardt believed there were about 75 people at the open house.

Eberhardt said the purpose of the open house was to let people see some of the hospital's new operating room equipment and to give people the opportunity to meet the some of their staff, including Dr. Donald Damschen and the hospital's newest surgeon, Dr. Robert E. Blease, who arrived in January after retiring from the Army. He's the hospital's first full-time orthopedic surgeon since the 1990s.

Blease and his assistants showcased the OR's new Hanna Table, which was purchased in January for $90,000, plus $450,000 in accessories. The table is used for 40-50 different types of surgeries, including hip replacement, hip fracture operations, knee and shoulder replacements, and other sports injuries, said Blease.

Visitors of Blease's OR had the opportunity to use some of the latest tools for cutting or suturing on a piece of raw chicken. In Damschen's operating room, visitors played with a laparoscope, a fiber optic instrument used for endoscopic surgery. The hospital has had the apparatus since 1996, but this is the newest and most modern equipment that the hospital bought in January at a price tag of $170,000, said Eberhardt. "This is state-of-the-art," said Damschen, a 1983 Plains High School graduate and a staff member of the hospital since 1996.

"I think it was a big success. People enjoyed themselves and learned what to expect if they ever need surgery. Hopefully, it'll alleviate any fear they might have if they face surgery in the future," said Eberhardt.

Those who took time to walk over to the Art on the Walls event could view the rows of art and hear the music of Rudy Boukal of Thompson Falls and Chilaili Wachiwi, a Native American from Trout Creek. Though Boukal had played piano at a reception before, this was Wachiwi's first time. This was the first time the two would team up to perform. Boukal played a stage piano while Wachiwi performed with one of her custom made flutes. The couple together performed four pieces written by Wachiwi. In addition, they each did two or three individual compositions.

Nelson said they try to have some type of musical entertainment at each reception, but this was the first time they had Boukal and Wachiwi perform together. Boukal said they rehearsed several times before the show and would like to form a group, but need a guitarist, base guitarist, and drummer. Anyone interest can contact Boukal at 827-4359. 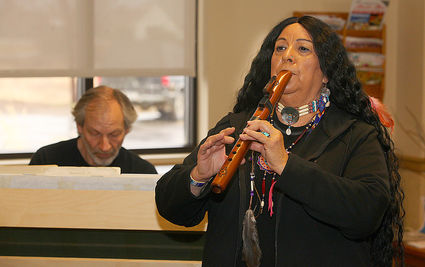 Artists from Noxon, Thompson Falls and Plains took part in this quarter's art show, which will be up until June 18. Prices of the art ranged from $30 to $530. Malachi Paulsen's "Leafy Lion" of last quarter's student show won the People's Choice Award and was on the cover of this quarter's program. Sixty-two pieces of art lined the hospital's "Main Street" corridor, including 21 photographs, which is a bit higher than usual, said Nelson, who added that she was once again impressed by the talent of those participating in the show. Photographer Lee Kinser of Plains and oil painter Robbi Gascon of Thompson Falls were first-time showers. The exhibit also had veteran artists, such as Rachel Gonzalez of Plains, who had seven pieces, including an oil painting on a circular saw blade and an oil on wood.

Linda Elliott of Thompson Falls experimented with her nature photographs by manipulating them on the computer so they resembled oil paintings. Sig Person of Paradise was especially impressed with Elliott's photography.

Tonya Revier, the hospital's marketing and community relations coordinator, felt the show had more traffic due to the combining of the two events. "There's always some amazing pieces of art and it's so nice to see so much variety and range of mediums," she said.