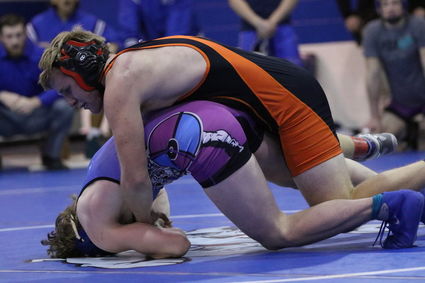 The Plains-Hot Springs Savage Horsemen are on the learning curve and trending upward.

The very young Savage Horsemen wrestling team began the season last week, competing in the Mission Quadrangular (which actually was two dual matches for each of the four teams involved) Thursday, taking part in a mixer match in Superior Friday and finally, grappling in the Bob Kinney Classic in Superior Saturday.

Senior Conrad Vanderwall won second place at 138 pounds to pace the Horsemen in Superior Saturday. Vanderwall lost only 12-11 to Cut Bank's Matthew Larson in the Kinney title match. Larson had pinned Vanderwall the night before in mixer match action.

Vanderwall reached the final Saturday by winning a technical fall from Mission-Charlo's Robert Dempsey in 4:35 of the quarterfinal match and pinning Glacier's Ricard Hewitt in 2:33 in the semifinals.

"Conrad really wrestled well Saturday, in the championship it was a back-and-forth match all the way," coach Jeff Kujala said. "He obviously figured some things out from that first match with Larson Friday and was ready to battle Saturday."

P-HS finished the meet with 33.5 points in the 12-team tournament. Kujala said Taylor Angle (113 pounds), Jesse Uski (160) and Stephen Yother (285) all finished the tourney one match win away from earning a Kinney placing medal.

Kujala says he and assistant coach Rocky Wagoner are working with a very young squad this season, a squad that includes six freshmen.

"That's a good sign for the future but we are pretty inexperienced," Kujala said. "We will be on kind of a learning curve early on this season and look to get better as we go on."

In Mission Thursday, meet organizers changed the mixer-match format to a dual format, and the Savage Horsemen lost to Thompson Falls 42-27 and to Mission-Charlo 57-19.

Brady Schrenk, Brody Black and Gage Fuhrman were also on the mats for P-HS in Mission.

Kujala said Bert DeTienne should make his season mat debut this week. DeTienne, Yother and Uski are all juniors in Hot Springs who have been around the P-HS program for a few years now.

"We are looking for leadership from our upperclassmen," Kujala said. "They have all made strides during their time with the program and now is the time for them to take on leadership roles."