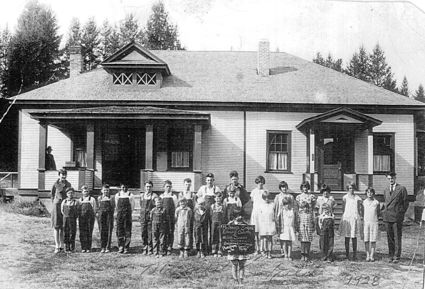 THE TWO-ROOM BELKNAP SCHOOL where Orin Kendall and Ivy Reeder taught is still standing but is now a private residence.

From Early Pioneers and Settlers of Thompson Falls

Orin P. Kendall was born April 30, 1904 in Williams, Iowa. In 1905 he and his family moved to Washington where they settled in the Heartline and Almira area. He attended the Cheney Normal School prior to moving to Montana.

Late in August 1926 Orin arrived in Belknap, where he was to teach school. Having grown up in the open plains country of Washington, this was an entirely new world.

In those days it was pretty well arranged who was to board the teacher, who was to do the janitor work, who was to make building repairs, and who was to furnish the fuel for the school building. All those jobs brought a little money into the home, where money those days was in very short supply.

Orin had a nice place to stay, near the school. The cost was $35 per month for a good room, laundry and plenty of good home cooking. This was before radio and for entertainment, they played three-handed pinochle and Orin was sure they wore out several decks of cards during the winter.

Transportation was by train with three passenger trains, each way, daily. It was possible to catch a train in Belknap, come to Thompson Falls, do some shopping and return home in less than two hours. Winter roads were practically non-existent for automobiles and it was not uncommon for a doctor to use the train when making an emergency call. He would be met at the station by someone with a sled. (Taken from portions of The Sanders County Ledger unknown date.)

Orin taught school at Belknap where he met his wife, Ivy Reeder, the primary teacher in the two-room school.

Orin married Ivy Reeder at Missoula December 28, 1927. Orin recalled in brief remarks to friends at the open house on the occasion of their 50th wedding anniversary. "We went from Whitepine to Missoula by train. There were at least three passenger trains running each way at that time."

After a day or two in Missoula, we returned to Whitepine where we were met by Ivy's father with a team and bobsled. There was about two feet of snow on the ground at the time. Two or three days after we arrived home, our friends came out from Whitepine to charivari us. It was 30 below zero. At that time, we resided at the home now owned by the Virgil Halls.

Orin continued to teach at Belknap until 1928 when they moved to Kalispell and Orin taught for one year. He taught school in Pablo from 1928 to 1937 and then moved to Whitepine where he taught until 1942.

Following his retirement, he was elected to the Montana Legislature. He was on the Thompson Falls City Council for two years and served as Thompson Falls mayor for 12 years, from 1961 until 1972.

During his administration as mayor the new City Hall and library were constructed, a new sewer system was built and a new fire truck purchased.

He was one of the first directors of the Lions Lodge and along with the other four directors contributed funds from his own pocket, never repaid, to get the senior citizen housing project started.

For several months he wrote a popular column, "Looking Back" for The Ledger. In it Kendall recalled incidents and events of the past.

When Kendall announced his retirement from active public life in January 1976, he issued the following statement: "...Montana and Sanders County have been good to me and I am proud of the fact that I have never lost an election in the county. I believe it is better to retire when people ask, 'Why are you retiring?' rather than, 'Why don't you retire?'"

"As I reminisce the past half century as a teacher, county official, mayor and legislator, many pleasant associations are recalled. The help and support of my friends and associates over the years has been greatly appreciated and I say, 'Thanks.' "

Kendall was noted for his wit and readiness to tell a joke or interesting story. He was frequently asked to speak publicly and to serve as master of ceremonies at banquets.

He and his wife had four daughters, Billie Smith, Jo Anne Johnson, Pat Eldridge and Glenda Farlan and a son, Orin G. Kendall.