By John Dowd and Annie Wooden 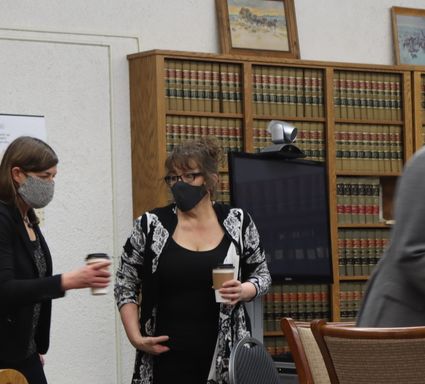 The trial of former Thompson Falls resident Danielle Wood began Tuesday with opening arguments by the prosecution and defense attorneys.

Prosecutors introduced themselves and their approaches for the trial, stating they intend to convince the jury of eight women and four men that Wood premeditated the 2018 murder of Matthew LaFriniere of Thompson Falls. In opening statements, prosecutors said Wood purchased the firearm prior to the murder and a disposable cell phone in order to call into 911 and create a distraction to law enforcement. The defense proposed that Wood is in fact innocent. They proposed that it is highly unlikely that Wood was able to leave her residence, commit the murder, hide the body and return to a gathering she was holding at the time within the allotted 30 minutes witnesses report her having been absent from the gathering. She also appeared back at her residence not disheveled, bloody or sweating after having supposedly dragging a piece of heavy plywood nearly 40 yards and having moved the body of the victim more than 14 feet, defense attorneys stated.

The prosecution began calling witnesses to the stand on Tuesday, including an employee of Ronan Sports and Western who reportedly sold the firearm to Wood. The witness testified that Wood entered and purchased the firearm legally, however "this was not a happy occasion. Most of my sales are happy events," the witness said. He mentioned that Wood did not appear happy about purchasing the firearm, as many are that he deals with. Generally, according to the employee, purchasers are excited to get a new item into their collection, purchase a present or get a gun for a profession, these he says are generally happy times. With Wood, it was "completely joyless" and "fun had nothing to do with this," he said.

The defense challenged the employee's testimony, as in the beginning he referred to Wood entering during the dark hours of the day, however on the receipt collected of the firearm sale, it was noticed that the time stamp was 4:15 p.m. in March. The defense argued that there is no way that Montana could have been in the dark hours during this time of year and day. Considering this, the defense argued that the witness' memory of the sale and event, especially after having sold a multitude of firearms over the course of 28 years, could be flawed.

The trial will continue this week at the Sanders County Courthouse. Judge Deborah "Kim" Christopher is presiding over the trial in 20th District Judicial Court. LaFriniere, 51, was found dead at his home on Airport Road east of Thompson Falls on May 3, 2018. Wood was arrested in the case on March 20, 2019, and pleaded not guilty to the deliberate homicide charge in April 2019. She has been held at the Lake County Jail since her arrest.