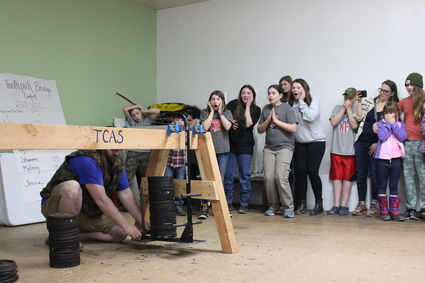 SHOCK AND AWE - Students and family watch as weight is added to the bridge of first-place winner Jessica Evans during the Trout Creek Adventist School's annual toothpick bridge challenge.

Students from Trout Creek Seventh Day Adventist School gathered for the second annual toothpick bridge contest earlier this month. After the success of last year's contest, students were excited to get back to building once again. "It appears to be a smashingly good time," Maurita Crew said.

Started by her father in the 1970s, Crew has kept the toothpick bridge contest a long-standing tradition throughout her teaching career. Students are allowed to use up to 750 toothpicks to build their bridge and they can use any glue they want. "I strongly suggested to them not to use hot glue," Crew told the families who gathered to watch at Whitepine Grange Hall. "Wood glue works the best."

This year, Crew's class consisted of nine students in grades one through seven. The contest was a fundraiser to raise money for new school equipment. Families sponsored students who were competing to build the strongest bridge that could hold the most weight. Some students brought in $1.35 for every pound their bridge could hold. Amy Ficklin, first-grade student, and Calder Craik, second grade, were this year's youngest builders. Crew told audience members the two had to build 75% of their bridges themselves. Ficklin and Craik used 474 toothpicks and named their bridge, President Trump. 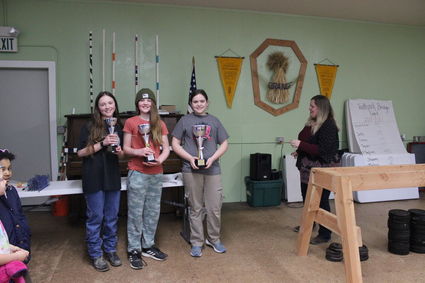 The student's goal this year, Crew said, was to build their bridges to hold more than 200 pounds, which no one was able to reach last year. Students set their bridge in place and once again, the "tower of power" was used to hold weight down on the bridges. Every three seconds, 10-pound weights were added until each bridge collapsed.