Little sluggers take off in T-ball 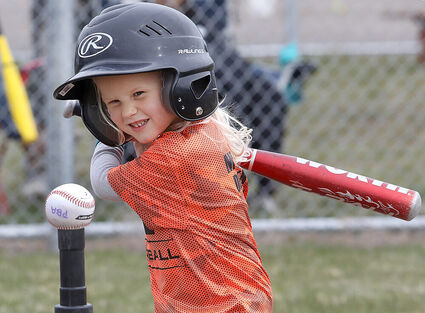 AT BAT – Ezra Booth of the Plains Cats & Dogs keeps his eye on the ball and eventually sends it nearly three feet toward the pitcher's mound.

Jose Altuve of the Houston Astros, at 5 feet, 6 inches, may be the shortest player in Major League Baseball right now, but he's got nothing on Ezra Booth, who stands at 40 inches and got to first base every time he went to the plate. He's only two inches taller than Ember Paquet of the opposing team, but then the tallest player on either team is Darren Heathers at 50 inches.

Tuesday was opening day for the T-ball players as the Plains Cheetah Speed took on the Plains Cats & Dogs at Amundson Sports Complex. Spectators get a different flavor of baseball at a T-ball competition, but most feel it's a bit more amusing, and a person might never see a pink flamingo stamp on a batter's helmet, like the one Cheetah Speed's 6 ½-year-old Lilah Jo Coonan was wearing.

Baseball chatter in T-ball is slightly different than even the older kids' youth baseball games. Don't play in the dirt, don't forget your glove, don't lay down, don't play in the dirt, and seldom do players in the big show skip to first base. "You'll need a bat," said parent Corey Booth to one of the players who came to the plate to hit. And more than once there were two base runners on one base. What it lacks in competition it makes up in entertainment. "It was a riot watching the kids. Best entertainment around," said Rod Stamm, who watched the game in support of a friend with a kid on the team. "This age is the best. Getting to watch the kids have fun and learn new skills," said Melissa Garland, one of the coaches for the Plains Cats & Dogs team.

The Cats & Dogs are sponsored by MT West Dentist and coached by Melissa and her husband, Aaron. Danielle Paquet is the head coach for Cheetah Speed, which is sponsored by First Security Bank. Each team has nine players that range from 4-6 years old and only a couple have played T-ball before, although several have played ball with their parents or friends at home, said Paquet. Both teams have help from parents, something both coaches appreciate.

T-ball is the kids' introduction to the game, but the rules are different. No score is kept. They hit the ball from an adjustable tee that sits atop home plate. Several knocked the tee out from under the ball. Every player had the chance at bat and they swung the bat until they hit the ball. And every player got a single, even if he or she was thrown out, which was rare, and when the last batter in the lineup hit the ball, the player went all the way around for a grand slam. Most of the time the ball was hit only a few feet, but a couple smacked it hard enough to almost reach the outfield, which meant those in the outfield had little to do but get bored. It was a surprise to the coach when Cheetah Speed Xander Howell, 5, made an accurate throw from third base to first. Five-year-old Oliver Fleenow of the Cheetah Speeds had one of the biggest hits with the ball going into center field, as did Cats & Dogs player Darren Heathers.

T-ball goes three innings or for one and a half hours, whichever comes first. Tuesday's game went an hour and 15 minutes. The Cheetah Speed's next game is April 28 at Hot Springs. On May 3, they play at Thompson Falls, May 11 against St. Regis at Plains, and on May 13 at Noxon. Paquet said she's hoping to have a fun game with the parents playing against the kids at the end of the season. "Just kind of a fun way to have a little party and keep everybody excited and the season the right way," she said. The Cats & Dogs next game is at Noxon on April 29. Their next home game is May 3 against Hot Springs.

Coaches helped batters with their stances nearly every time they went to the plate. Paquet said one of her concerns was making sure she didn't get hit in the head by a bat while trying to get a player in the right spot at the plate. "I want them to respect the sport and the equipment that they need," said Paquet. "But also I just want them to learn the proper safety. Because as we all know, a kid finds a stick and another kid finds a stick and it turns in to the sword fight," said Paquet.

"At this point the most important thing is still having fun and how to be safe," added Paquet, whose daughter, Ember, 4, is probably the shortest Cheetah on the team at 42 inches tall. Nevertheless, her lack of height didn't slow her enthusiasm at the plate. She batted right handed in the first inning, tried batting left once in the second, but quickly switched back to right. Ezra Booth of Cats & Dogs also tried batting from the left and had better results, hitting it a bit farther than from the right.

"T-ball is absolutely the cutest thing," said Paquet, who is coaching for the first year. "I love that my daughter is having a really great time, and that I got to be a part of that. She saw her big brother playing T-ball last year and really wanted to play but she was too young. So to see her to be able to get out there and do it is fun and to be a part of it is really great as well," she said.

Aaron Garland said they've been teaching the kids the basics of throwing, the right batting stance, and when and where to run. Nevertheless, a common shout to each batter after they hit the ball was run, run, run. The same went for a player on first, second and third. Matt Fields ran alongside his son, Maverick, to the next base once. "It seems like we definitely need to work on when to run," said Paquet. She said she wants to make practices and games fun for the kids so they will continue. "We aren't ready for the MLB yet, but you know one day maybe," she said. 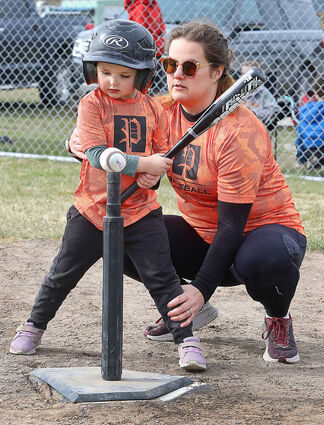 "It is absolutely hilarious being their coach," said Paquet, who added that the actual games are more chaotic than practices because of all the crowd noise and both team coaches. The coach also noted that it's a challenge just keeping them interested during an entire game, especially since none of them are hitting the ball to where the "outfielders" are positioned, which are basically in the baseline. "I think there's so many different moving pieces in T-ball, and moving in all their own directions that you just have to learn to go with the flow, and let it happen," said Paquet. "Snacks in the dug out definitely help keep morale up," she added.

There was no sulking at the end of the game when the two teams gave each other high fives. Paquet said they all left smiling, although Maverick was sad about getting his nap cut short. "I think they did great and kids were asking when they can do it again."