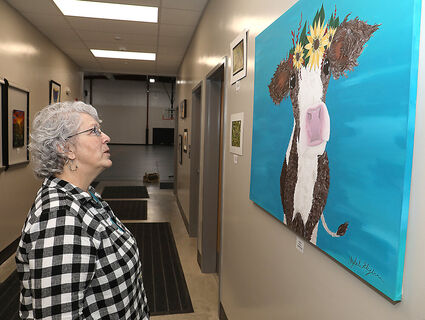 BIG PIECE – Debbie Brown looks over a painting by junior Shylah Flynn called "Maybell," a portrait of a cow. Brown commissioned Flynn to paint the cow for her daughter, Mandy Fausett.

Attendance from the community was low but excitement from the student artists was high.

An estimated 50 people attended the two-hour reception for the show of art students' work in the school's new auditorium, where visitors were treated to a myriad of art, refreshments and entertainment. Sixty students from five different art classes from seventh grade to seniors participated in the show. It was the first time the school had hosted an in-person exhibit in two years. The exhibition was a virtual showing in 2020 and 2021. At Monday's reception, senior Adelle Ercanbrack sang for visitors. Senior Macey Scott played guitar and senior Aubrey Tulloch played the piano.

"I'm pleased with the quality of art showcased in the exhibit," said Cole. Most of the students had two or three pieces in the exhibit.  Ercanbrack had the most with seven, including ceramic, multi media, plaster, and tape sculpture, which was a life-sized ballerina titled "If I Were To Dance." It was one of four tape sculptures at the show. Senior Hailee Steinebach had an upside down Spider-Man hanging from the ceiling, something the elementary students really liked, said Cole. Senior Gabe Worrall had one peeking around a corner and Stacie Foley, a sophomore, had one she called "Broken Archer," which got its name because the torso was collapsing, said Cole. Ercanbrack's dancer fell apart before show, but was put back together in time for opening night. The show remained up until Thursday.

The tape sculpture art is fashioned after artist Mark Jenkins, who made the medium popular in the 2000s. Cole has been incorporating the medium in her class for three years. The students make the figurines in parts, using their own bodies for the form. The students first place thin plastic wrap around themselves, then put sticky packing tape over that. It's a process that takes them three or four days to complete. Foley's archer had a bow and long pony tail.

There were just over 200 pieces on display from a near two-inch long yellow pencil by junior Jose Martinez to a 90-inch long enlarged printed school pass sending a student to the principal's office for painting on a wall. Harley Sturdivant, a freshman, titled his multimedia work pass "Fashionably Late."

The exhibit included eight ceiling tiles in the art classroom, including one by Grace Horton of flowers and a bee that she did in honor of teacher Carl Benson, who retires this month. Cole started tile art several years ago in her old classroom space. There are an estimated 300 painted tiles incorporated into the ceiling in the main school building, but these were the first in the new space.

There were a variety of art types in the exhibit - watercolor and acrylic paintings, ink, book sculptures, cardboard, photographs, plaster masks and hands, and a size 10 shoe sculpture entitled "Steppa" by freshman Sophia Leggat, which had a $20 price tag on it. Junior Kallen Burrows had one of the two medal pieces in the show with an aluminum rose. Sophomore Brandt Snead had a mini metal dog made from nuts, bolts and wire. It sold for $25, one of two pieces that sold the first day. Cole will present an award of art supplies to the student who gets the most votes from fellow art students for the best piece at a ceremony on May 23.

Scott, a senior who had two pieces on display, hopes to make a living by doing video game artwork. "It gives me lots of creative outlets. And doing a show like this gives me a good perspective that I can make a career in art," said the 17-year-old Scott, who has taken art classes all three years in Plains and as a freshman in Utah. "It's something that comes so easy for me and it's enjoyable," she said.

Several projects were the result of teams of two, such as "Enchanted Rose," a giant paper Mache rose by Emory Ercanbrack and Peyton Wasson. They had a real rose as a model and used math to make it to scale 10 times the size of the actual flower. Cole knew taking on the project was going to be challenging, something both girls agreed with. It took them two weeks, but both were pleased with the results, as was Cole, who took art supplies to Wasson while she was in the hospital in December. The result was an acrylic painting called "Medicine Bear," which was one of five pieces she had in the show. She also had an example of pointillism art, a technique using small distinct dots of ink to make an image. The sophomore used a photo she shot of her dog "Koko" as a model for her black and white pointillism artwork.

Seventy-one pieces were for sale with prices ranging from a $2 clay candy bowl by Martinez to a $100 acrylic painting called "Paddle Lake" by sophomore Donny Nelson. Freshman Django Oakcedar had unique prices for his art. On his colored pencil drawing "Where'd the Man Go?" the cost was a firm handshake. For "Huh?" also colored pencil, the buyer had to beat Oakcedar at rock, scissors, paper. He had a 23 cents - "exact change" - price tag for his colored penciled "Gold in Them Hills."

Cole is impressed with Oakcedar's art skills, though he doesn't have the same esteem for his own, which is the reason for his pricing strategy. However, he was pleased with one piece he believes good enough to ask a legitimate price. Called "Busted," and going for $30, it's a plastic mold of a bandaged hand. Oakcedar said it wasn't planned to have a wrap, but a friend of his dropped and broke it. Oakcedar glued it back together and placed the bandage around it. "I don't classify my art as very good, but creation is entertaining and it's fun," he said.

"I thought this was wonderful. As we know not too many things these days can be bought on a firm handshake," said Cole. "I really have enjoyed watching the whole art process with this young man. He is just a freshman. I am crossing my fingers he takes another art class in high school," added Cole, who's in her 26th year as an art teacher. "He's inventive in his creative process and always comes up with artworks with a twist! Even though he doesn't claim to be artistic, he is one of the hardest working and invests time in his work." 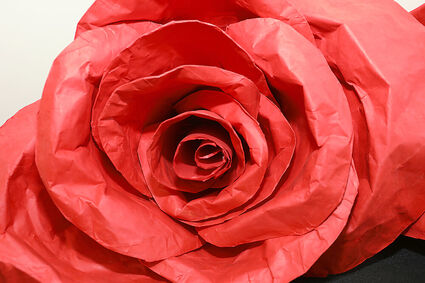 FLOWER POWER – A giant paper flower called "Enchanted Rose" by Emory Ercanbrack and Peyton Wasson is on display at the school art exhibition.

Cole was also awed by the work of Shylah Flynn, a junior, who had the largest painting at the show. Flynn's 48X35-inch painting, entitled "Maybell," is a portrait of a cow. "It's beautiful," said Cole. "It doesn't look like a high schooler did it. It really makes you smile," she said. Title 1 teacher Debbie Brown commissioned Flynn to do the painting for Brown's daughter, Mandy Fausett, who provided Flynn with the canvas and paint. Brown told Flynn to use her own artistic expression, although Flynn made several sketches and presented them to Brown, who said they hadn't settled on a price.

"I like watching the students go through their creative process and I get to see their work through the years," said Cole. She pointed out a piece by senior Gabe Worrall, whose multi media art was an old book made up like a mouth with sharp teeth and a tongue coming out. Cole said the entire piece is made from book parts, along with resin for dripping saliva. He called it "Hungry For Knowledge."

Cole called the show a success. She said it's an important event for the students, which builds their confidence and motivates them. "It's all about them and I could see they were enjoying it," said Cole, who was initially concerned with the smaller space for the show, but believes it worked it nicely.