READY FOR THE SEASON 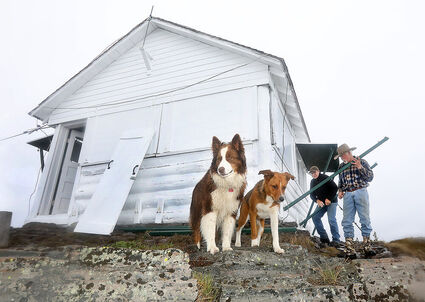 READYING FOR SUMMER – Wild Plains Back Country Horsemen members John Errecart (in back) and Dan Mathis get struts in position in order to prop up the lookout shutters while Mathis' dog Monty (left) and Errecart's dog Rocket enjoy the view.

The Big Hole Lookout is ready for the season, but it won't be manned by anyone looking for fires. Instead people at the lookout will be admiring the scenery surrounding the cabin at an elevation of 6,922 feet.

The historic lookout is part of the U.S. Forest Service's recreation cabin rental program, which goes from June to October. Last week, three members of the Wild Plains Back Country Horsemen worked their way up Big Hole Lookout Trail #368, clearing the trail as they went until the snow hid the fallen timber.

"Considering the late spring and having to walk on one to three feet of snow for the last three-quarters of a mile, the opening went very well. The lookout is now ready for the first renters scheduled to arrive June 11th," said John Errecart of the Wild Plains Back Country Horsemen.

Errecart, along with WPBCH club members Dan and Dianne Mathis of Trout Creek, took the 2.75-mile trek uphill to the former lookout last Wednesday. The Mathis couple rode horses to the snow line while Errecart rode "Bullet," his 22-year-old mule, accompanied by 13-year-old "Rosie," the mule that carried supplies for the lookout, along with snowshoes. "Fortunately, the snow was still firm enough we could walk on top of it without snowshoes," said Errecart, who opened and closed the lookout last year, too. This is the second season for Big Hole Lookout to be open to the public.

The club volunteers had planned to get the lookout ready a week earlier, but had to postpone it due to adverse weather. Errecart had started clearing Weeksville Creek Road just off Highway 200 of trees on the road in mid May. He then used a tractor to clear the road of rocks and boulders. Last Tuesday, the three of them worked on clearing Trail #368 of fallen trees. They worked up into the snow, removing trees on top or near the top of the snow, coming within a couple hundred yards of the lookout. Errecart said it appeared that others had been on the trail removing fallen timber. He knew they weren't with the club because they set the cut timber next to the trail, rather than tossing them away from the trail, as the WPBCH does when it clears trails each year.

"We don't want them just off the trail in case a rider falls from a horse. We don't want someone falling on them," said Errecart, who's been with the club since it began in 2006. "If it wasn't for John, most of this work wouldn't get done," said Dianne Mathis, who joined the club with her husband about 10 years ago.

Errecart said stock animals don't really like going through deep snow, so they left their animals at the snow line and walked up the final three-quarters of a mile. The snow pack ranged from one to four feet deep.

The lookout is located about 10 miles (nearly 20 road miles) northwest of Plains. The 14x14-foot lookout was built in 1930. At that time, the Forest Service had numerous fire lookouts throughout western Montana. Big Hole Lookout was closed in 1972 and for 45 years it sat abandoned. The Forest Service and Passport in Time volunteers in 2013 started a major restoration project in order to add it to the historic recreation cabin rental program. They finished in 2017. Members of the horsemen club ferried supplies to the lookout during the four-year project. Soon after it was complete, the club adopted the lookout and helped maintain it. They open it at the start of the rental season in June and closed it up for the winter sometime in October. The Forest Service charges $45 a night to stay at the cabin.

Big Hole Lookout can accommodate four people, according to the Plains Ranger District website. It has a twin bed with a mattress pad, cots, chairs, a table, and a wood stove. The back county horsemen club purchased an assortment of additional items for the lookout - lanterns, cots, chairs, pots, pans, and a propane stove. The club installed a spring box about .75 miles below the lookout, refurbished the outhouse, located about 80 yards from the cabin, and installed a hitching post nearby. Errecart put up a new Big Hole sign earlier in the year.

It took just over four hours for the group's transit to and from the cabin and about three hours of work at the lookout. They first raised the eight large wooden shutters and attached the struts at the base of the building and the shutters to give lodgers a 360-degree view from inside the lookout. They placed a new mattress cover on the twin bed, swept out the cabin, washed the windows, and got the stove ready with firewood. They plan to revisit the upper portion of the trail to remove any timber that was hidden beneath the snow and to do some paint touchups on the cabin. "We'd hoped to do some interior and exterior touch-up painting, repair mortar on an exterior corner, and a deeper clean on the interior, but couldn't get the supplies needed to do so to the lookout," said Errecart. 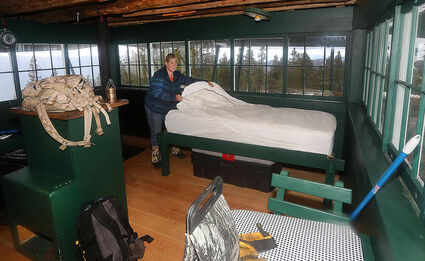 "The location of the lookout provides the renter views of the Thompson River drainage, several mountain ranges, including the Missions, Swans, Cabinets, Bitterroots, and Coeur d' Alenes," said Errecart, who served in the Forest Service for 35 years. He also noted that renters at Big Hole will see industrial logging from the late 1990s and remnants of the Copper King fire from almost six years ago. "During their stay renters are infrequently visited by hikers, bikers, stock users and occasionally, a mountain goat," said Errecart, who believes that Big Hole Lookout is the only rental on the Lolo Cabin Rental Program that requires a hike. The Cougar Peak Lookout, located just over 20 miles from Thompson Falls, via Blue Slide Road, is accessible by vehicle.

In 2020, Errecart and his three mules packed in paint and furnishings to the lookout. Errecart and other club members work every year to clear several trails in the vicinity. Recently, club volunteers used their stock to haul 30,000 pounds of gravel on Trail #223 between the ferry landing along Highway 135 and St. Regis.