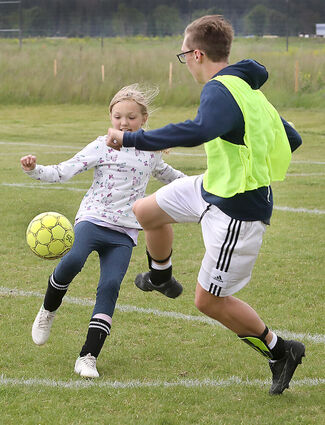 CONFRONTATION – Elisabeth Weedeman of the U12 Clark Fork Soccer Alliance goes up against U16 player Jonny Felix in a scrimmage game at Amundson Sports Complex. The U12 team is headed to the Montana State Tournament in Helena. The U16 kids claimed a 4-1 win against the U12 team Friday.

Only one Sanders County soccer team will be participating in the Montana State Tournament in Helena this coming weekend and their coach said they're ready to take it all.

The "Shillelaghs," a nickname they gave themselves, finished the season a week earlier with a 5-2 triumph over Stevensville and a 5-3 win over Great Falls, one of their toughest games of the season due to a poor calls by referees and the constant physical contest from their opponent, said Jeremiah Allen, who co-coaches the team with Chance Adams.

The team, comprised of 10 boys and five girls, held an end-of season scrimmage game against Wrobleski's U16 team at the Amundson Sports Complex at Plains Friday, followed by a barbecue. It was the Shillelaghs' only loss - 4-1 - with the only U12 goal done by Katherine Wrobleski in the first half. She nearly put one in the goal in the last two minutes of the game when her father, Dave Wrobleski, was filling in as keeper.

"I think my players just kicked back and enjoyed a good friendly scrimmage with their older piers. They had fun with it and let loose a little bit," said Allen. One of the team's most fearless opponents on the U16 team was 8-year-old Braedan Allen, who played U10 soccer this year and was constantly attacking the ball wherever it went Friday. He even once took out 12-year-old Ava Lawyer in a one-on-one battle for the ball. Jeremiah Allen served as referee during the scrimmage, but couldn't help putting a foot on the ball in an attempt to score for his team. He was blocked by Dave Wrobleski.

Montana Showcase 2022 will be a double elimination tournament, said Wrobleski. He said the Plains U12 players, sponsored by Clark Fork Valley Hospital, will first go up against the MC Posse of Miles City, followed by a face off against Bigfork and then Big Sky. The Montana Youth Soccer Montana Showcase will be hosted by the Helena Youth Soccer Association. The games will be held Saturday and Sunday.

Allen credits his team's success during the season to "emotional durability and their individual drive to be better each time their cleats hit the field," along with the trust they have for one another and the strong bond the players have with each other as a team.

"They have had several mentally challenging teams where we have come into the huddle at half, down, and they dug in their heels and came back stronger and rose above everything holding them back," said Allen. The players range from 10-13 years old with a couple first year players. Most have played three or four years, according to Allen, who added that Lawyer as the most experienced player on the team, kicking the ball around since she was 3 years old. The U12's primary keeper during the season has been 12-year-old Tristan Allen with J.D. Warta, 11, as the backup keeper.

"I can't think of another group of kids so close and willing to work with each other and the way their individual characters fit together to create a very fun and exciting season," said 20-year-old Jeremiah Allen, who has coached for two years and played for 15 years. "I think that as long as we play our game and keep our heads level and don't grow arrogant of our successful season, we'll do well," said Allen. "We just need to go in fresh like we are 0-0 and enter that tourney with a sting mentality, which I know we have," he added. Allen said they'll spend this week finely tuning a coupe aspects of their team play techniques.

"I could add would be just to re-emphasize how proud I am of my kids, not only as respectful and skilled players on the field, but also as being courteous and caring off the field and keeping that winning mentality in their pre-teen life," said Allen, who added that his team is one "that strives to not only make themselves better but bring everyone with them to."

Fall soccer season will begin in September and will include teams from U6 to U19 with teams from Sanders and Mineral Counties and high school teams.