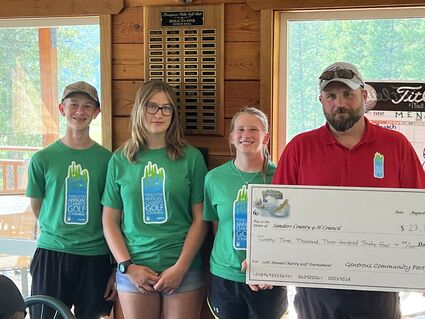 After a two-year hiatus due to the pandemic, Avista was back at River's Bend in Thompson Falls last Saturday for their annual charity golf tournament. The beneficiary for this year's event, which featured a full lineup of 18 four-person teams, was Sanders County 4-H.

While Avista sponsors the tournament, the local 4-H clubs and volunteers gathered sponsors and silent auction items, helped promote the event, and volunteered during the event. Tournament administrator Sean Kelly with Avista said the group broke another fundraising record, with more than $23,600 raised for Sanders County 4-H. 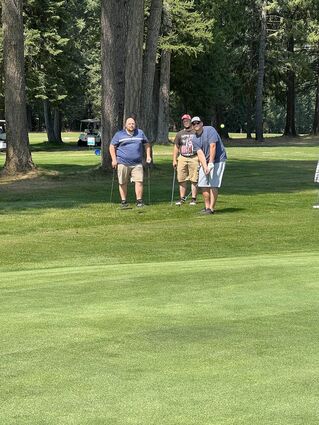 Tom Kirkland of Thompson Falls follows his chip shot on hole 9 at River's Bend Golf Course as his teammates watch on during the Avista scramble on Saturday.

Four teams competed in the women's division, and it came down to a tie when the 18 holes were over. The team of Barb Mosher, Chris Kelly, Danice Toyias and Ellie Baxter, along with the team of Annie Wooden, Jeneese Baxter, Katrina Nygaard and Sarah Fairbank each scored one over par, 73, in the tournament. It was a sweltering day at River's Bend, so the teams discussed and decided to forgo a playoff, call it a tie, and donate their winnings back to Sanders County 4-H. In fact all the winners that day donated their winnings back to 4-H, helping to boost the total raised by the tournament.

In the men's division, the team of Nathan Snead, Sean Kelly and brothers Tyler and Caleb Bates won with a 60. Second place went to John Rausch, Julia Vanicek, Kyle Bagnell and Tim Bagnell with a 61, and in third place with a 62 was the team of Dusty Burgess, Gary Revier, Jack Revier and Tanner Colombo.