Elections moves to new off ice 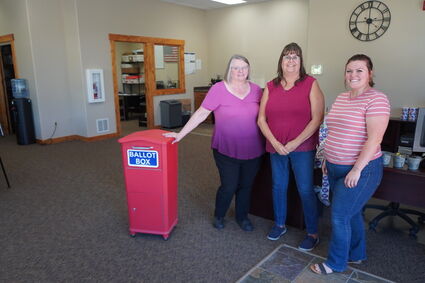 The Sanders County Elections office, including (from left) Bobbi Christenson, Theresa Meagher and McKenna Wallace, has a new office across the street from the courthouse that will allow a more focused approached to county election procedures.

The Sanders County Elections office has a new office space with more room to focus on county election procedures.

The office, which was previously located within the Clerk and Recorder's office at the courthouse, has moved across Jefferson Street to 1037 W. Main St., Suite 102. The location was formerly rented by the Montana Department of Revenue and is next door to Clark Fork Title. "We needed more room and this allows us a more focused approach to elections," Election Administrator McKenna Wallace said of the move.

Wallace, Bobbi Christenson and Theresa Meagher moved into the office a few weeks ago and are busy preparing for November's general election. Wallace stated that the move was a long process, but that it was worth the wait. The office is an extension of the courthouse, with the employees remaining on the county's computer network.

Wallace said that residents can take care of all their election needs in the new space, including voter registration, dropping off ballots, getting replacement ballots or changing an address. "Everything except vote tabulation will take place in the new office," she noted. Tabulation will still occur in the lower courtroom of the courthouse, as the equipment remains housed in the vault in the basement of the courthouse.

The new location offers another layer of insurance in the accuracy of elections, Wallace explained. "I think people will appreciate that extra level of assurance." She added that the number of registered voters in the county has increased to more than 9,900 as of August 30, making the move to a larger office space even more essential. She said they wanted to get moved before the general election.

Wallace was hired as the county's elections administrator in June. "I love elections," she said. "I love learning about the different systems and how things work." She has worked with the county since March 2021, previously in the treasurer's office.

The general election is scheduled for Tuesday, November 8. Voters can check their information on the My Voter Page at https://app.mt.gov/voterinfo, or call the office at (406) 827-3038.