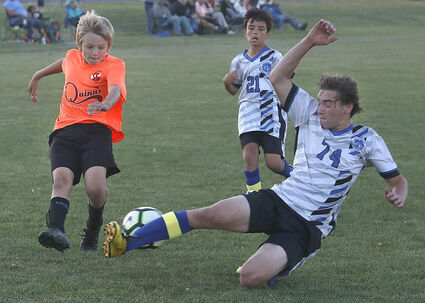 STOPPED COLD – Mission Valley Christian Academy Eagle Avi Gooden slides in to block a kick by Clark Fork Soccer Alliance Clint Weedeman during a game at Plains. Tuesday's game ended with no score and a tie.

The Plains U14 soccer team played against a high school team last week and didn't lose. But they didn't win either.

The Clark Fork Soccer Alliance played fast and hard against the Mission Valley Christian Academy Eagles last Tuesday and even though the Eagles had almost twice as many players an...