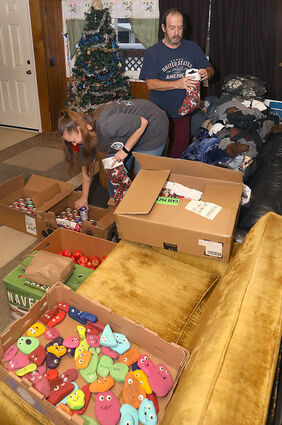 Members of Joint Operation Mariposa (JOM) doesn't want any senior citizen veteran to be forgotten at Christmastime and on Saturday hand delivered a decorated stockings of goodies.

It's part of JOM's annual "Santa Socks" program, which delivers filled Christmas stockings to the veterans' homes. On Saturday, Mrs. Claus Callie Timmer, Ed Foste and the Grinch traveled to Plains, Thompson Falls, Trout Creek, and Noxon with stockings, while Mrs. Claus Angela Muse and Elf Heather Allen delivered stockings to Plains, Hot Springs, Paradise, and St. Regis. The foursome delivered 60 stockings to the veterans, which ranged from the 60s to the 90s. The two groups drove almost 340 miles and each spent over five hours delivering the Christmas stockings to veterans Saturday.

The socks were filled an assortment of 21 items, such as oranges, soda, apple, lotion, Chapsick, mini multi-tool, notepad, pen, candy, puzzle book, and a hat, gloves, socks set, and a hand-painted rock character, created by 10-year-old Chloe Monselet and 9-year-old Saydi Carter, both of Plains, to name a few. Allen and Foste spent about two hours filling the stockings last Tuesday afternoon, but Foste spent another hour adding more items the next day. Eleven businesses from Plains and Thompson Falls donated most of the items while JOM bought and donated the combination hat, gloves and socks set. The stockings were made by Sharon Heglie of Noxon. This is the fourth year for the program and the recipients appreciate the gesture, said Foste, who missed 11 of his family Christmases during his 20 years serving in the Navy. "Santa Claus takes care of everyone on the world and Mrs. Claus takes care of the vets," said Foste.

The group delivered socks to 26 veterans in Plains, three in Hot Springs, three in Thompson Falls, three in Trout Creek, one in Noxon, and one in St. Regis. Any remaining stockings are given to veterans they come across at the VFW, said Allen, who has participated all four years.

Foste said it fills his heart and soul with cheer. "To see someone that has sacrificed for our county, smile and feel good. and know that they are still appreciated by the community. It is a very humbling experience," he said. "We need more of this in the world."

JOM volunteers have delivered 60 Santa Socks each year. "We take recommendations from those who know the veterans," said Allen, an Air Force vet. "Our focus for these socks is mainly those veterans who don't have anyone else during the holidays, so they know they are remembered and that people care about them," said Foste. "As a veteran, we all have been at one time or another deployed during the holidays away from family overseas. And as some of us get older, we are alone and still deserve to have a Merry Christmas, and they need to know that they are still important to the people of the community for their service and sacrifices," he added.

"It's always nice to bring a smile to someone's face. This particular project brings out the emotional side of some because they realize that someone cares about them. When they want to talk, we listen. If they want a hug, we give them a huge hug. The whole experience is heart warming," said Allen, who added that even those who had received Santa Socks in the past are still surprised and enjoy the visit. Some even get emotional, said Allen, who plans to do it again next year. "We will continue this as long as we have veterans on our list," she said. "To continue to bring the joy to the veterans and continue to let them know they are thought about," said Foste.

Allen said that the Plains Bible Chapel also filled baskets with items and gave them to the JOM volunteers to deliver to the single veterans on the list.