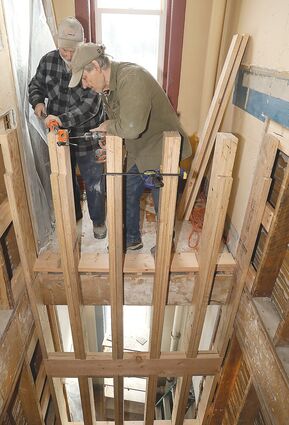 NEARLY DONE – Dave Colyer holds wood in place while Rudi Boukal places the screws in the framing for the new elevator lifts at the Paradise Center.

Patrons of the Paradise Center will soon be able to visit every floor without having to trek up and down three flights of stairs.

Volunteers finished framing two shafts last week that will eventually become ADA compliant vertical platform lifts. The vertical platform lifts are a type of elevator, a high-end wheelchair lift, said Rudi Boukal, one of four men, along with Dave Colyer and John Thorson of Plains, and Jim Hawley of Paradise, who spent about 150 collective hours constructing the wooden frames over a three-week period.

"The project has gone well, although there have been a few challenges working with a building that is more than 100 years old," said Boukal, a Thompson Falls resident who has volunteered his carpentry skills for numerous Paradise Center projects. The center's board had initially planned to have a limited use/limited application elevator - also known as a LULA elevator - which Boukal said is a hybrid between a standard elevator and a wheelchair lift and has a lower weight capacity that can travel from two or more stories. However, he said it was too wide for the existing space and would have required significant demolition to the building. He said they would have had to tear out the walls into the Glacial Missoula exhibit room and into the painting classroom and remove some of the stone foundation to install steel beams, which would have been a significant cost.

Instead, they decided to install two vertical platform lifts, one that travels from the basement to the first floor and a second one that runs from the first floor to the upper level. The first lift, located on the west side of the building and starting in the basement, will have a platform of 48x60 inches and a range of about 12 feet. The other lift was situated on the east side of the building and it will be 50x56 inches and go about 17 feet between floors. Both will have a capacity of around 750 pounds. The lifts will not have a contained box, but a flat platform with two or three sides and a gate that manually opens, said Boukal, who finished the framing last Tuesday.

Electrician Anthony Train of Thompson Falls and his crew finished the electrical hookups last Monday and the building code inspector passed the framing installation with "flying colors," said Boukal. An elevator representative from Access Elevator of Missoula, where the systems were purchased, was scheduled to get to the center this week to take measurements for the wiring and to order the customized lift kits.

The elevators are being funded through a Montana Department of Commerce Historic Preservation Grant of $123,220 and $29,000 from Sanders County. John and Karen Thorson wrote the grant application in 2020 and it was approved in May 2021. Boukal and John Thorson started demolishing the areas where the elevators will be placed in October and the four men started building the framing in late December. As a professional, Boukal got paid for a portion of the work, but much he did on a volunteer basis, including the removal of the boys and girls restrooms in the basement, a task done by Boukal and Thorson. The old restrooms were replaced with modern restrooms, one that is ADA accessible.

Boukal said that one of the challenges in the project was providing a lift service without changing or damaging too much of the 112-year-old building structure. "The real challenge was the lift in the basement. We had to anchor that to the stone foundation," said Boukal. They also took out a set of stairs that didn't appear to have a destination. "We don't know what they were there for. We called them the 'stairway to nowhere,'" said Boukal. The stairs started on the second floor and stopped at a wall of the third. Boukal believes they were installed when the building was constructed in 1910.

Thorson felt the job was going well and said it would have been considerably more expensive without the volunteers, but he feels that getting the center totally ADA compliant was an important part of making the center available to everyone. The board had an ADA compliant ramp installed at the front entrance several years ago and had already installed ADA restrooms in both buildings. "These lifts complete easy access to all public spaces in the school," said Thorson, who serves as the board treasurer and is responsible for most of the grants the center has received.

"Prospective students for art classes offered on the top floor did not register because they did not want to go up and down two flights of stairs to use the bathrooms. On another occasion, a woman in a wheelchair wanted her family to haul her up stairs, in her chair, because she was so eager to see the historic classroom," said Thorson, who added that while they will encourage able people to use the stairs, the lifts will afford access to persons with mobility challenges or health issues. Because of the age of the building, it wasn't mandatory to have ADA compliant entries or elevators, but the board wanted to provide anyone in the public access to the entire center. Thorson said the lifts will also allow for more visitors to appreciate the historic features of the former school, which includes the historic classroom on the top floor. In an effort to retain as much of the historic building's identity, they located the lifts in previously unused spaces, such as the cloakrooms and a former storage room.

Boukal and Thorson have worked together on numerous projects at the center, including creating auditorium audience risers and the custom fabrication of molded trim for the restrooms, the green room, and adjacent hallways. Boukal and Mac Hall, another volunteer at the center, stripped the walls in a large room in the school basement and built new walls and window boxes in the room. Boukal also designed a moveable train display, a 40-foot backdrop frame in the railroad room, and a dozen easels for art classes.

Karen Thorson, the center's secretary, said the ADA lifts will transform the center, not only for residents of Sanders County, but for visitors from outside the area. "There have been people who wanted to take classes, like the pottery class in the basement, but they couldn't access that space. Now they'll be able to go there," said Karen.

"Now anyone, especially the aged or handicapped, can have access to the entire building, especially to all our classes and functions that we are planning to offer," said John Thorson. "I think things have gone quite smoothly," he said. "The funny thing is even some of the board members have not seen the basement nor the second floor in years. They will be able to do so now," he said, adding that he appreciates the Montana legislature, the Department of Commerce, and Sanders County for their support of the project.

"I think that the Paradise Center can play a vital role in enriching the overall community, as a resource for history, as a source of information for our visitors, and for the promotion and exercise of all the various types of artistic expression," said Boukal, a professional composer and pianist who has taught some of the music lessons at the center. He stepped down from the board two years ago to concentrate his efforts on the construction projects and so not to have any conflict of interest, but he will be rejoining the board this spring to focus on music education, performances, and school outreach. He said the lifts will be installed sometime in February.

The next major project for the center will be the erection of a mini roundhouse as part of the outdoor walking trail. Karen Thorson said they have already received a grant for the building, which will be used to exhibit railroad items too large to go inside the center. She said they hope to start construction on the roundhouse this spring.