TRICK OR TREAT, MOVE YOUR FEET! 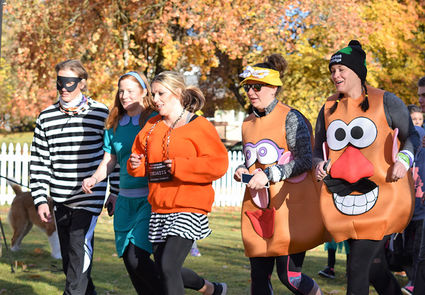 Trick or Treat, Move Your Feet! is exactly what happened on the Thompson Falls Community Trails system Saturday morning, beginning and ending at NorthWestern Energy's Power Park. Over 50 costume goers accepted the challenge of competing in a one-mile or a 5K (3.1 miles) fun run.

Fitting right in with the Halloween season, the start of each race was announced by the hissing of a cat or a chop of an axe rather than the norm of a gun or "on your marks, get set, go!" sound. Top male Cael Thilmony, and female Hattie Neesvig, runners of the 5K, were awarded a pumpkin pie, and top 1-mile finishers were Chase Giegling and Faith Palmer. In addition, pumpkins were bestowed to the top costume winners. 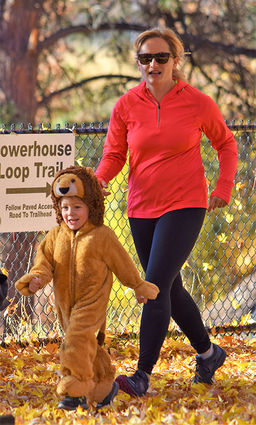 Trick or Treat, Move Your Feet! was organized to raise funds for the scenic trail system located along the Clark Fork River. "We are hoping to have this every year to raise funds for trail maintenance and weed spraying," organizer Kathy Conlin commented.

This was the first year the event took place and by the looks of it, the participants enjoyed themselves and will be back next year for more festive fun.